Amber Guyger was convicted of murder after shooting Botham Jean, an unarmed black man. Guyger thought she was in her own apartment when she returned home, and that Botham Jean had broken into her apartment.

She was sentenced to ten years in prison instead of the maximum 28. The brother of the murder victim embraced her and told her that he had forgiven her. In their brief encounter, he presented the gospel to her.

After the official proceedings, the judge stepped down from the bench to offer Guyger some parting words of comfort. Guyger said that she did not have her Bible. “Judge [Tammy] Kemp left the court, went to her chambers and returned with her personal Bible to give to Guyger. ‘This is your job for the next month,’ Kemp told Guyger. ‘You read right here: John 3:16.’”

It’s at this point that the Freedom from Religion Foundation stepped in:

The actions of the judge presiding over the Amber Guyger murder trial are now the subject of a formal complaint after she gave the convicted murderer her personal Bible.

The Freedom from Religion Foundation filed a complaint with the Texas State Commission on Judicial Conduct on Thursday, saying it was inappropriate for Kemp to give Guyger the Bible and read a passage from it.

The foundation says government employees “may not use the power and privilege of their offices to preach their personal religious beliefs.”

This isn’t the first time an atheist organization has criticized the court over the use of the Bible.

Karl S. Chambers was convicted of fatally beating 70‑year‑old Anna May Morris while robbing her of her Social Security money. District Attorney H. Stanley Rebert told the jurors, “Karl Chambers has taken a life. As the Bible says, ‘And the murderer shall be put to death.’” ((“Court Rejects Bible,” The Atlanta Journal (November 16, 1991), E6.))

In many (maybe most) courts, witnesses are required to swear an oath to tell the truth. While doing this, they place their left hand on a Bible. Many courts have the phrase “In God We Trust” emblazoned on the wall behind where the judge sits. For example:

Upon hearing the nonsense from the Pennsylvania Supreme Court Mr. Rebert stated, “I don’t know of any God‑fearing prosecutor that has not used some scriptural or religious reference in arguing to a jury. God’s law is the basis for Pennsylvania law and all law.” ((“Court Rejects Bible,” E6.))

The image below is from the interior of the Pennsylvania Supreme Court in the State Capitol. The walls are covered with 43 murals painted by Violet Oakley (1874-1961). The mural above the Chief Justice shows Ten Commandments being cut in stone (below). One of those commandments is “Thou shalt not kill.” 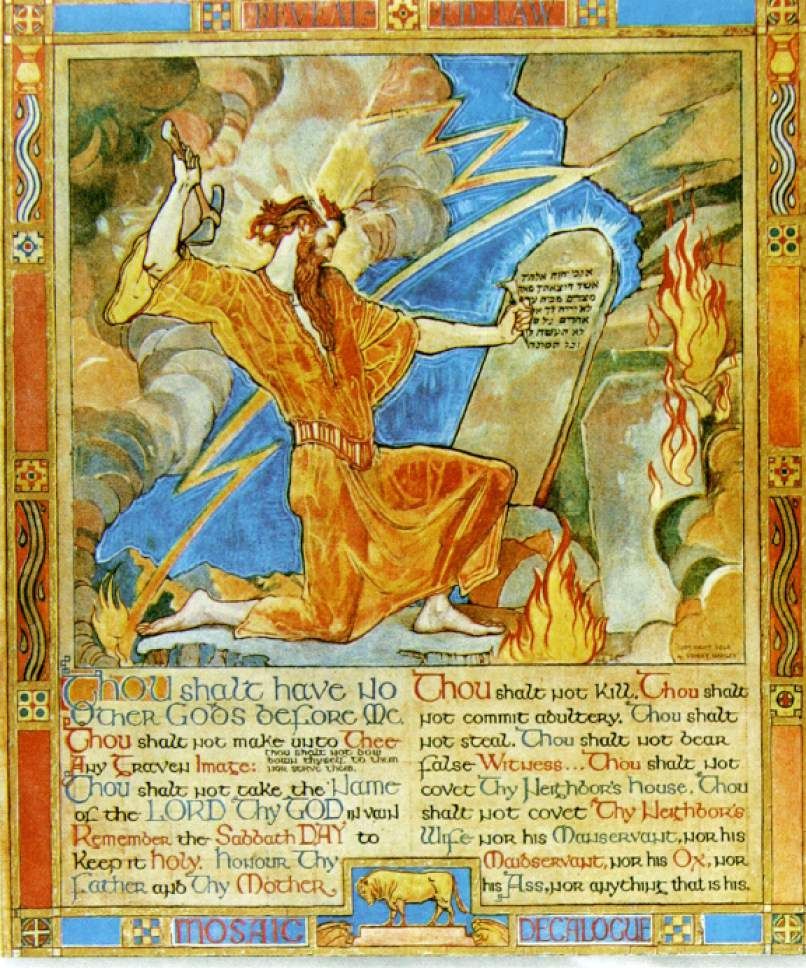 You will also find the following from William Blackstone’s works where he is quoted, “human Laws are only declaratory of an act in Subordination to Divine Law.”

The United States Supreme Court has its own Bible:

Why is murder wrong? Who says? By what permanent standard? If there is no God, there are no fixed laws. The survival of the fittest prevails. What if the prosecuting attorney had asserted that murder is wrong by referencing the Bible? Would the court have objected? On what basis can anyone be found guilty or innocent? Is the State through its courts the final arbitrator?

If I, as a consistent evolutionist, were defending Mr. Chambers during his resentencing hearing based on the ruling by the Pennsylvania Supreme Court, my line of argument would go something like this:

DA: Did you have a class in biology?

DA: Were you taught that you evolved over long periods of time and that the strongest organisms survived over the weaker ones?

DA: Did you learn that these were the natural and positive consequences of evolution?

DA: Were you taught the Bible in public school?

Chambers: No, sir! It was not permitted.

DA (to the jury): Ladies and Gentlemen. You spent your tax dollars educating this young man. It’s been said that our students are not learning what they’ve been taught. Now we find out that when a person does master his lessons, we put him on trial for what he has learned an applied consistently. You are here today because some strong ancestor eliminated a weaker ancestor on the evolutionary tree. We are proud of our evolutionary heritage. Look how far we’ve come due to the elimination of so‑called “weak links.” How can Mr. Chambers be faulted when he simply followed the evolutionary tradition he learned in school? In addition, you heard the prosecuting attorney in the first trial tell us, “As the Bible says, ‘And the murderer shall be put to death.’” The Pennsylvania Supreme Court has overturned Mr. Chambers' death sentence because the prosecutor quoted from the Bible. The same Bible that says that a “murderer shall be put to death” also states that murder is wrong. If the Bible is inadmissible in the one case, specifying punishment, then it ought to be inadmissible in the other case, specifying what constitutes a crime.

There is nothing in the Constitution that forbids a judge from expressing his or her personal religious beliefs to someone just convicted of a crime. In fact, it should always be done but only within the context of a Christian worldview. The First Amendment is clear: “Congress shall make no law respecting an establishment of religion or prohibiting the free exercise thereof,” including free speech. On what basis are laws made? That’s the real issue. The Freedom From Religion Foundation does not have a basis for determining whether there is such moral prohibition that we call “murder.”

John Jay, the first Chief Justice of the US Supreme Court said: “Providence has given to our people the choice of their ruler, and it is the duty, as well as the privilege and interest of our Christian nation to select and prefer Christians for their rulers.”

Justice Joseph Story (1779-1845), who was appointed to the US Supreme Court by President Madison, said in an 1829 speech at Harvard: “There never has been a period of history, in which the Common Law did not recognize Christianity as lying at its foundation.” In addition, he wrote:

“Probably, at the time of the adoption of the Constitution, and of the [First] Amendment … the general, if not the universal, sentiment in America was, that Christianity ought to receive encouragement from the State so far as was not incompatible with the private rights of conscience and the freedom of religious worship. Any attempt to level all religions, and to make it a matter of state policy to hold all in utter indifference, would have created universal disapprobation, if not universal indignation…. The real object of the First Amendment was not to countenance, much less to advance Mohammedanism, or Judaism, or infidelity, by prostrating Christianity, but to exclude all rivalry among Christian sects and to prevent any national ecclesiastical patronage of the national government.”

Justice Story wrote the following for a unanimous Supreme Court decision 1844 in Vidal v Girard’s Executors (1844): “It is also said, and truly that the Christian religion is a part of the common law….”

Read “Gospel Grace in a Courtroom and the False-Gospel Resentment it Provoked” by Tom Ascol of Founders Ministries.