While everyone is questioning Pres. Trump’s conversation with a Ukrainian official about the possible criminal actions of former Vice President Biden and his son’s sweet financial deals, the real constitutional crisis is that billions of dollars, taken from US citizens by force, have been given to foreign governments like Ukraine. Where in the Constitution does it say that elected officials can take money from US citizens and give it to a foreign government?

Prior to the 16th Amendment (1913), there was no money to give, and there is nothing in the Amendment that changes the enumerated powers of the Constitution.

Foreign aid is not  one of our government’s enumerated powers, even if it’s for humanitarian aid:

The following is from the Tenth Amendment Center:

Foreign aid is a system by which the American taxpayers are forced, in the name of national security or defense of the “free world,” or charity, or whatever the politicians tell us, to subsidize US export companies and prop up client states that are often ruled by dictators.

Just to make sure this principle was legally codified, the Tenth Amendment was included: “The powers not delegated to the United States by the Constitution, nor prohibited by it to the States, are reserved to the States respectively, or to the people.”

Here’s the “general welfare” provision in Article I, section 8:

We are to believe that the Founders, at the direction of the states, gave unlimited power to the Federal government when the states were suspicious and reluctant to give even a little authority to a national governing body. In addition to the enumerated powers in the body of the Constitution, the states insisted on an added Bill of Rights that included the Tenth Amendment that defined the limited authority of the Federal government.

James J. Kilpatrick is correct when he wrote, “And so long as the Tenth Amendment remains a part of the Constitution, it is elementary that it must be given full meaning — that the intention of its framers must be acknowledged and respected. Plainly, the intention of the Tenth Amendment was to restrict the Federal government—to hold it within the strict boundaries of the delegated powers.” ((James Jackson Kilpatrick, The Sovereign States: Notes of a Citizen of Virginia (Chicago: Henry Regnery Com., 1957), 47.)) 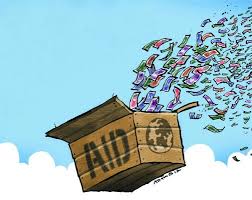 A careful reader will note that “general welfare” did not mean aid to some at the expense of others, as James Madison was quick to point out in Federalist 41:

But what color can the objection have [that the phrase “general welfare” is not specified by particulars], when a specification of the objects alluded to by these general terms immediately follows and is not even separated by a longer pause than a semicolon? … Nothing is more natural nor common than first to use a general phrase, and then to explain and qualify it by a recital of particulars…. ((The Federalist No. 41: General View of the Powers Conferred by The Constitution, No. 41 (January 19, 1788).))

In the entire list that follows the semicolon, there is nothing that even remotely resembles the social welfare programs or foreign aid of any kind. Following modern-day proponents of General Welfare, the national government has unlimited authority to do anything it defines as General Welfare. This is impossible. Madison points out that the phrase is found in the Articles of Confederation, and it has a particular meaning:

Article III. The said States hereby severally enter into a firm league of friendship with each other, for their common defense, the security of their liberties, and their mutual and general welfare, binding themselves to assist each other, against all force offered to, or attacks made upon them, or any of them, on account of religion, sovereignty, trade, or any other pretense whatever. 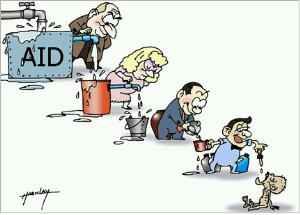 You can see by how “general welfare” is used to mean what applies to everyone generally and has nothing to do with wealth redistribution either foreign or domestic. You can find similar uses of “general welfare” in Articles VIII and IX. Madison continues:

Construe either of these articles by the rules which would justify the construction put on the new Constitution, and they vest in the existing Congress a power to legislate in all cases whatsoever. But what would have been thought of that assembly, if, attaching themselves to these general expressions, and disregarding the specifications which ascertain and limit their import, they had exercised an unlimited power of providing for the common defense and general welfare? I appeal to the objectors themselves, whether they would in that case have employed the same reasoning in justification of Congress as they now make use of against the convention. How difficult it is for error to escape its own condemnation!

The modem concept of general welfare is most often defined in terms of wealth redistribution where some members of society (“the rich”) are taxed heavily in order to benefit the “welfare” of others (“the poor”). General welfare, according to the Constitution, means welfare that benefits everyone more or less equally in the United States. This can be clearly seen in providing “for the common Defense.” Taxes collected to defend the nation benefit everyone generally. Taxing the American people so that money is given to foreign powers is not found in the Constitution.

Ron Paul rightfully declares, “Foreign aid is taking money from the poor people of a rich country and giving it to the rich people of a poor country.”