Whenever we ponder Christianity and government, you can almost wager some well-meaning believer will argue that we can’t expect rulers to be just because Paul actually had the Roman Emperor Nero Claudius Caesar in mind when he penned Romans 13.

Like many of his predecessors in the Julio-Claudian dynasty, Nero was a bit of a beast.  He had his own mother killed.  The Roman historian Tacitus had this to report about him:

Therefore, to stop the rumor [that he had set Rome on fire], he [Emperor Nero] falsely charged with guilt … the persons commonly called Christians… In their very deaths they were made the subjects of sport: for they were covered with the hides of wild beasts, and worried to death by dogs, or nailed to crosses, or set fire to, and when the day waned, burned to serve for the evening lights…[1]

Most scholars believe Paul composed his epistle to the Romans between 55 and 57 AD, or roughly about the time Nero came to the throne at the age of sixteen. Given the brutal, bloody and conniving history of Nero’s family, would it have been reasonable to believe that Paul, the ambassador-apostle of the faith, under divine inspiration, would look at the Roman Caesars and conclude, “now, boys and girls, that is some mighty fine and virtuous leadership"?

The scene almost seems comic. We can’t imagine Paul, over a meal, leaning back and saying something like, “Nero’s a pretty good guy. He only burns a few believers alive every night.”

But, wait, you argue: why would we expect any ruler, any government to be fair or just?  Shouldn’t we expect persecution as Christians?

To answer that question, we must remember the consequences of a simple truth confirmed repeatedly in Scripture: Our God is a God of absolute justice. We don’t worship a philandering Zeus or a remorseless Thor. The God of Abraham, Isaac, and Jacob is the author of the just scale and the bribe-hating judge.

For the LORD loves the just and will not forsake his faithful ones. Wrongdoers will be completely destroyed; the offspring of the wicked will perish (Psalm 37:28).

Both Paul and Peter followed the same pattern in describing the obligations of a magistrate. A ruler is a joy to the righteous and “an avenger who brings wrath” against the wicked:

For rulers are not a cause of fear for good behavior, but for evil. Do you want to have no fear of authority? Do what is good and you will have praise from the same; 4 for it is a minister of God to you for good. But if you do what is evil, be afraid; for it does not bear the sword for nothing; for it is a minister of God, an avenger who brings wrath on the one who practices evil (Romans 13:3-4).

Submit yourselves for the Lord’s sake to every human institution, whether to a king as the one in authority, or to governors as sent by him for the punishment of evildoers and the praise of those who do right  (1 Peter 2:13-14).

Two different apostles with precisely the same assurance: do the right thing and rulers will praise you. Do evil and rulers will punish you. The commandment to obey authority comes with an assurance: rulers have an obligation, from God, to be just. That’s why every magistrate, Christian or not, is called a “minister of God.” 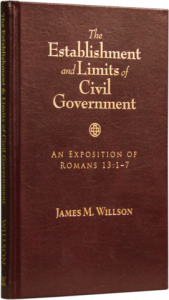 Sometimes when I hear Christians yearning for persecution, or justifying bad magistrates, I almost think they see Paul’s actual words, but read them as follows: “Obey rulers at all times because they can be nasty buggers.” Not at all. Both Peter and Paul were preaching to the prince and his people. If you want to know why so many dictators and tyrants hate the Bible, it’s because they know God’s Word puts them on warning: be fair, be just, or the Most High God is coming after you.

So in view of the many times Paul and Peter were unjustly beaten and imprisoned, and in view of the horrible brutality of Roman emperors, what are we to conclude? Were Paul and Peter just kidding about the obligations of rulers? Far from it: “Let God’s Word be true and every man a liar” (Romans 3:4). Paul and Peter were speaking for God. They were putting every magistrate in the Roman Empire on warning: Unjust rulers will face His wrath, and sometimes it may even be delivered by His Servants.

Over and over in the Bible, we see this pattern: God allowed Moses to beat Pharaoh back with plagues. The Hebrew midwives lied to the king and disobeyed him when they were commanded to kill Hebrew newborns. In a kind of ancient tax revolt, Ehud stuck a knife in the belly of an evil king and called it a message from God. The wise men refused to tell Herod where the Christ Child was born. Peter, when ordered not to preach the Gospel, disobeyed the religious authorities and concluded it was better to obey God than man. When Paul’s Roman citizenship was abused, he refused to be secreted away but demanded his jailers own up to their wrongdoing.

We obey rulers, in other words, when they are doing what God wants them to do, and we disobey them, rebuke them, recall them, vote against them, and–depending on circumstances–confront them with arms, when they are in violation of God’s will.

Persecution may come from a mother-killing emperor, but it will never be “just” or it isn’t persecution in the first place. In other words, if you want to be persecuted for Christ’s sake — oppose an evil magistrate.  That will do the trick.