The 911 We Can’t Discuss on Social Media, In the Media, and from Members of Congress 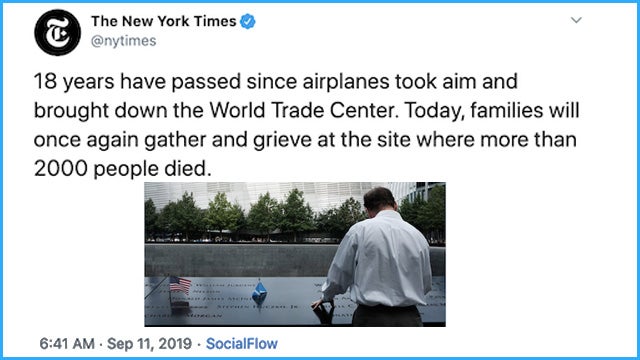 Instead of remembering who was responsible for this vile evil, we've elected Muslims to Congress. One man has not forgotten. His name is Nicholas Haros. During the Memorial Service in Jersey City, New Jersey, Mr. Haros said the following in response to Ilhan Omar's comment that "CAIR was founded after 9/11 ’cause they recognized that some people did something." The Council on American–Islamic Relations (CAIR) was founded in June of 1994:

NICHOLAS HAROS: My mother, Frances Haros.  Good morning, brothers and sisters in good faith.  Listen, “some people did something”?  I am here today to honor any 76-year-old mother, Frances, on the solemn nation’s anniversary of the 9/11 attacks.  Mom, we’ll miss you, and love you very much.  “Some people did something,” said a freshman congresswoman from Minnesota, to support justify the creation of CAIR?  Today I am here to respond to you exactly who did what to whom.

HAROS: Madam, objectively speaking, we know who and what was done.  There is no uncertainty about that.  Why your confusion?  On that day, 19 Islamic terrorists, members of Al-Qaeda, killed over 3,000 people and caused billions of dollars of economic damage.  Is that clear.  But as to whom, I was attacked, your relatives and friends were attacked, our constitutional freedoms were attacked, and our nation’s founding on Judeo-Christian principles were attacked.  That’s what “some people” did.  Got that now?  We are here today Congresswoman, to tell you and The Squad just who did what to whom.  Show respect in honoring them, please.  American patriotism and your position demand it.  For God and country, amen.

The following article is by James Patrick Riley.

Eighteen years after the fall of the World Trade Center, I find it odd that very obvious and necessary questions about Islam and the West simply can’t be publicly contemplated, for fear of offending someone in Riyadh, or Manhattan for that matter.   I’m not even talking, at the outset, about terrorism or violent jihad.  I’m talking about very simple and obvious conflicts involving cherished western traditions which include the right to revere or ridicule religious faith, or the notion that we are all equal before the law, or even just something as simple as the right to sell bacon and alcohol in your grocery store.

It’s difficult for me to believe that even the most protective multiculturalist would argue that Mohammed can never be ridiculed but it’s okay to make Buddha and Jesus jokes.  Adapting such a position would require the guardians of tolerance to admit their standards were inconsistent.  I know they are good at avoiding that conclusion with critical theory and intersectional dodges, but I’m guessing the imperative “Bow to Allah, infidel” chiseled in marble, would not sit well — even with them. Rather than have that conversation, and force that conclusion, the usual approach is to a) pretend there is no conflict, b) call anyone who mentions the conflict a bigot.  Even Donald Trump, regularly pillaged for being an anti-Muslim bigot, took exception to a Pamela Geller event that tested the limits of Islamic ridicule.  As if to prove Geller’s point, Islamic terrorists arrived, guns in hand.

Is it any wonder our “war on terror” staggers along like a blind man on a meth and whiskey binge?  We don’t know where we’re going, who we’re fighting, and what our enemy believes.  A long-time friend and a former marine officer made the mistake of introducing non-disputed Islamic beliefs (jihad, dhimmitude, taqiyah) at a training session for Iraq bound soldiers.  He was relieved of his position.  Robert Spencer, a mild-mannered scholar, who is very careful not to broad-brush peaceful Muslims in the west, and a man who merely elaborates violent and repressive themes within Islamic theology, has been banned from travel to the UK.

All of which makes me wonder: when the 9/11 hijackers brought down the world trade center, when they crashed into the Pentagon, and when we responded by agreeing never to discuss their religion in a negative light, when we sent American soldiers to die, establishing an “Islamic republic” in Iraq — um,  just who won and who lost?

In my case, I guess the legacy of 911 is that I don’t get to discuss Mohammed, Allah, or the Q’uran on Facebook. 911 made them sacred territory.