Here’s the latest craziness from the Lunatic Left:

A Swedish professor in the field of applied behavioral science has suggested that we may need to rethink cannibalism and begin eating human flesh to save the planet from climate change.

Instead of burying or cremating the dead, we should barbecue them and get over our aversion to cannibalism. In reality, we’re all just animals.

But is it crazy given the operating assumptions of these nutballs? Not at all. If a person is an unadulterated atheist/materialist who does not borrow moral capital from a Christian worldview, is it morally wrong to eat people? The short answer is no.

The world of Soylent Green is a world devoid of a way to account for morality. Why not breed people like cattle? Who says this would be morally wrong? By what standard? 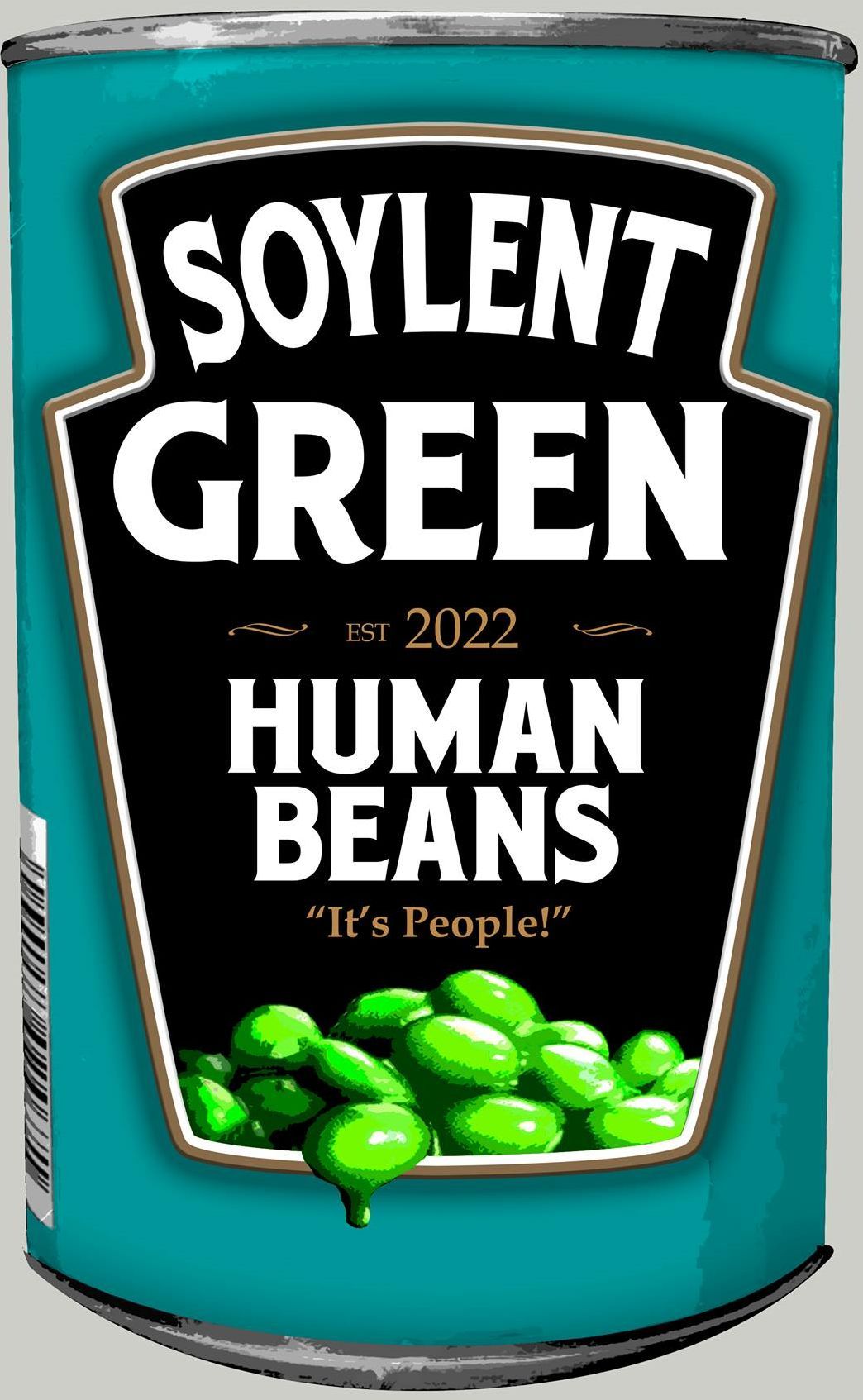 The following is from Aldous Huxley author of Brave New World and Doors of Perception:

For myself, as, no doubt, for most of my contemporaries, the philosophy of meaninglessness was essentially an instrument of liberation. The liberation we desired was simultaneously liberation from a certain political and economic system and liberation from a certain system of morality. We objected to the morality because it interfered with our sexual freedom; we objected to the political and economic system because it was unjust. The supporters of these systems claimed that in some way they embodied the meaning (a Christian meaning, they insisted) of the world. There was one admirably simple method of confuting these people and at the same time justifying ourselves in our political and erotic revolt: we could deny that the world had any meaning whatsoever. ((Aldous Huxley, Ends and Means (London: Chatto & Windus, 1946), 273.)) Atheists, materialists, and evolutionists are cranking out books trying to come up with ways to account for morality given evolutionary presuppositions. I have a shelf-full of them. Their first problem is that they assume there are such “things” as ethics and “morality.”

Let me be clear. I am not saying that atheists are immoral. They do moral things and act in moral ways but only in terms of a foreign worldview called Christianity. Atheists must borrow what they concede is a moral worldview because materialism knows nothing of morality. At the atomic and molecular level, there is no such thing as morality. Billions and trillions of molecules that have no morality don’t suddenly become moral because they’re in the shape of what we call human beings.

Modern-day biology has become materialistically reductionistic, subject only to “physics and chemistry”:

Modern biology has arrived at two major principles that are supported by so much interlocking evidence as to rank as virtual laws of nature. The first is that all biological elements and processes are ultimately obedient to the laws of physics and chemistry. The second principle is that all life has evolved by random mutation and natural selection. ((Edward O. Wilson, “Let’s Accept the Fault Line between Faith and Science,” USA Today (January 15, 2006). The evolutionist cannot account for the existence of “biological elements” and the “laws of physics and chemistry.” Why are there “laws”?))

There is no room for sentiment, morality, or any of the poetic graces in life. Trying to salvage the consequences of such thinking, Michael Ruse and E.O. Wilson state that “morality is an illusion fobbed off on us by our genes to get us to cooperate.” ((“The Evolution of Ethics,” New Scientist, (1985), 50-52.)) Who says? Genes can’t fob off or care if we cooperate. Animals eat other animals and sometimes their own kind. I scarcely call this cooperation; it’s all about survival and there’s no one to say that they or us are doing anything morally wrong.

My point, which I’ve made numerous times, is that atheists can’t account for the justification of a universal moral code that supposed evolved entities are obligated to follow. The operating assumptions of atheism make such a code impossible to locate, identify, and enforce. There is no personal cosmic lawgiver who demands “Thou shall not…” or “Thou should….”

For example, Richard Dawkins states the position well: “Much as we might wish to believe otherwise, universal love and welfare of the species as a whole are concepts that simply do not make evolutionary sense.” In the same chapter of The Selfish Gene, Dawkins writes, “I think ‘nature red in tooth and claw’ sums up our modern understanding of natural selection admirably.” ((Richard Dawkins, The Selfish Gene (New York: Oxford University Press, 1976), 2.))

To push his case further along, Dawkins offers a fitting analogy:

The argument of this book is that we, and all other animals, are machines created by our genes. Like successful Chicago gangsters, our genes have survived, in some cases for millions of years, in a highly competitive world. This entitles us to expect certain qualities in our genes. I shall argue that a predominant quality to be expected in a successful gene is ruthless selfishness.

If you want to get an idea of what Dawkins is describing, consider the 1929 St. Valentine’s Day Massacre that took place between two Chicago criminal gangs: The South Side Italian gang led by Al Capone and the North Side Irish gang led by George “Bugs” Moran. The shooters had the selfish genes. Their goal was to survive at all costs and to keep their selfish-gene boss happy. Given what Dawkins claims for evolutionary development, did the killers do anything morally wrong?

Some of Dawkins’ fellow evolutionists are uncomfortable with the way their popular high priest states his views. For example, Scott M. James writes the following in his book An Introduction to Evolutionary Ethics:

And yet, when we step back and observe ourselves, there is something about Dawkins story that doesn’t make sense. For if he’s correct, then people would never have an interest in doing the right thing (never mind knowing what the right thing to do is); people would never admire virtue, rise up against injustice, or sacrifice their own welfare to benefit strangers. If human beings are ruthlessly selfish at the core, then we should find unintelligible Adam Smith’s observation that man possesses capacities “which interest him in the fortunes of others, and render their happiness necessary to him, though he derives nothing from it, except the pleasure of seeing it.”

James’ use of Adam Smith is interesting since Smith was neither an atheist nor an evolutionist. Smith believed in God and a moral universe that was reflective of God’s character. A man who pursues his own interest in economic exchanges is in reality “led by an invisible hand,” so that [b]y pursuing his own interest he frequently promotes that of the society more effectually than when he really intends to promote it.” ((The material on Adam Smith is taken from Jerry Bowyer, “God and the Economists,” Forbes (August 17, 2011).

Smith’s “invisible hand” is the hand of “Providence.” In his Theory of Moral Sentiments (1759) Smith points out that acting in a virtuous way has social benefits by way of cooperation “with the Deity.”

But by acting according to the dictates of our moral faculties, we necessarily pursue the most effectual means for promoting the happiness of mankind, and may therefore be said, in some sense, to co-operate with the Deity, and to advance as far as in our power the plan of Providence. By acting other ways, on the contrary, we seem to obstruct, in some measure, the scheme which the Author of nature has established for the happiness and perfection of the world, and to declare ourselves, if I may say so, in some measure the enemies of God. Hence, we are naturally encouraged to hope for his extraordinary favour and reward in the one case, and to dread his vengeance and punishment in the other.

Adam Smith believed in a moral universe because he believed that God set the moral standards for behavior.

If there is no God, then there is no morality that must be obeyed. There may be behaviors that an atheist claims are moral or immoral, but there is no ultimate judge that says so, either on this side of the grave or on the other side.

Given atheistic assumptions about the origin of the universe and evolution from molecule to man, will there be any difference at death between the most moral person and the most immoral person other than the obituaries that are written about them by the living? Both will turn to dust, and not a single molecule of their dusty remains will be treated any differently based on how they lived.