Here we go again. A hypocritical Leftist quotes the Bible to support governmental theft. Forcing companies to pay a minimum wage is theft. In addition, noting is said in the Constitution that gives authority to the Federal Government to pass minimum wage legislation.

The President and every member of Congress takes an oath to uphold the Constitution, therefore, passing a law to force companies to pay a certain wage rate is unconstitutional and violates the oath they took.

Here’s what Pete Buttigieg said in the latest debate:

This is so much bigger than a trade fight. This is about a moment when the economy is changing before our eyes. There are people in the economy who go through more jobs in a week than my parents went through in the lifetime. The minimum wage is just too low, and so-called Christian conservative senators right now, in the senate, are blocking a bill to raise to minimum wage.

Notice the Proverb says “whoever.” The Proverb is not only about employers. It’s all-inclusive and includes civil government. The biggest oppressors of the poor are civil governments. A forced minimum wage hurts the least skilled, the very people who need any job they can get.

The minimum wage also hurts businesses whose profit margins are not that great. A forced increase in the minimum wage (including Social Security and Medicare) often hurts small business owners the most.

Minimum wage legislation is also discriminatory. Walter Williams has made the observation that often “teenage black males are considered undesirables by the general population. In other words, they are discriminated against. They suffer from the stereotypes attached to their particular group. He asked the obvious question: ‘How does someone who is part of a group that is discriminated against find a way to prove to somebody doing the discriminating that his assessment is incorrect?’ It was really this question: ‘How do undesirables break through the discrimination against them?'” ((Gary North, “How Minimum Wage Laws Promote Racial Discrimination” (July 18, 2014).)) “Whenever federal minimum wage laws mandate an increase in the minimum wage, within a very short period of time, the unemployment rate for black teenage males increases.” ((Gary North, “Minimum Wage Laws: a Litmus Test for Economists” (February 24, 2014).))

By being able to compete with other workers by working for less.

Dr. Gary North writes the following in his commentary on the book of Proverbs:

Verses such as this one [Prov. 14:31] can be misused in the name of God. Promoters of coercion by the State in the name of social justice invoke Old Covenant passages that commend mercy. But their appeal to such passages is a cover for oppression. The heart of mercy is its voluntarism. The fact that a person is not compelled by civil law to lift up another person is what constitutes an act of compassion as merciful. If the person in need of assistance has a legal claim on compassion, then the issue is obedience to the civil law rather than grace. Coercion goes beyond the undermining of mercy. The State takes money from one group and transfers it to another group. This transforms politics into special-interest competition. Gaining a majority in a civil government allows wealth redistribution by force. This is the essence of judicial oppression. It is common for defenders of the welfare State to justify this because the official targets of State power possess greater wealth than the official recipients. But the issue of economic oppression has to do with the use of the State’s monopoly of violence to extract wealth from a targeted group of voters who did not win elections. (236)

Nothing is said in the Bible about paying a particular wage. The Bible does require that whatever wage for work is promised, it must be paid.

You shall give him his wages on his day before the sun sets, for he is poor and sets his heart on it; so that he will not cry against you to the LORD and it become sin in you (Deut. 24:15).

What does Jesus say about the minimum wage? Nothing. Consider the following:

“For the kingdom of heaven is like a landowner who went out early in the morning to hire workers for his vineyard. He agreed to pay them a denarius for the day and sent them into his vineyard. About nine in the morning he went out and saw others standing in the marketplace doing nothing. He told them, ‘You also go and work in my vineyard, and I will pay you whatever is right.’ So they went. He went out again about noon and about three in the afternoon and did the same thing. About five in the afternoon he went out and found still others standing around. He asked them, ‘Why have you been standing here all day long doing nothing?’ “‘Because no one has hired us,’ they answered. He said to them, ‘You also go and work in my vineyard.’ “When evening came, the owner of the vineyard said to his foreman, ‘Call the workers and pay them their wages, beginning with the last ones hired and going on to the first.’ The workers who were hired about five in the afternoon came and each received a denarius. So when those came who were hired first, they expected to receive more. But each one of them also received a denarius. When they received it, they began to grumble against the landowner. ‘These who were hired last worked only one hour,’ they said, ‘and you have made them equal to us who have borne the burden of the work and the heat of the day.’ But he answered one of them, ‘I am not being unfair to you, friend. Didn’t you agree to work for a denarius? Take your pay and go. I want to give the one who was hired last the same as I gave you. Don’t I have the right to do what I want with my own money? Or are you envious because I am generous?’ So the last will be first, and the first will be last.” (Matt. 20:1-16).

A forced minimum wage is a denial of property rights and the denial of property owners and workers to enter into contracts voluntarily. Employer/employee relationships are contractural. The government becomes the oppressive third party. 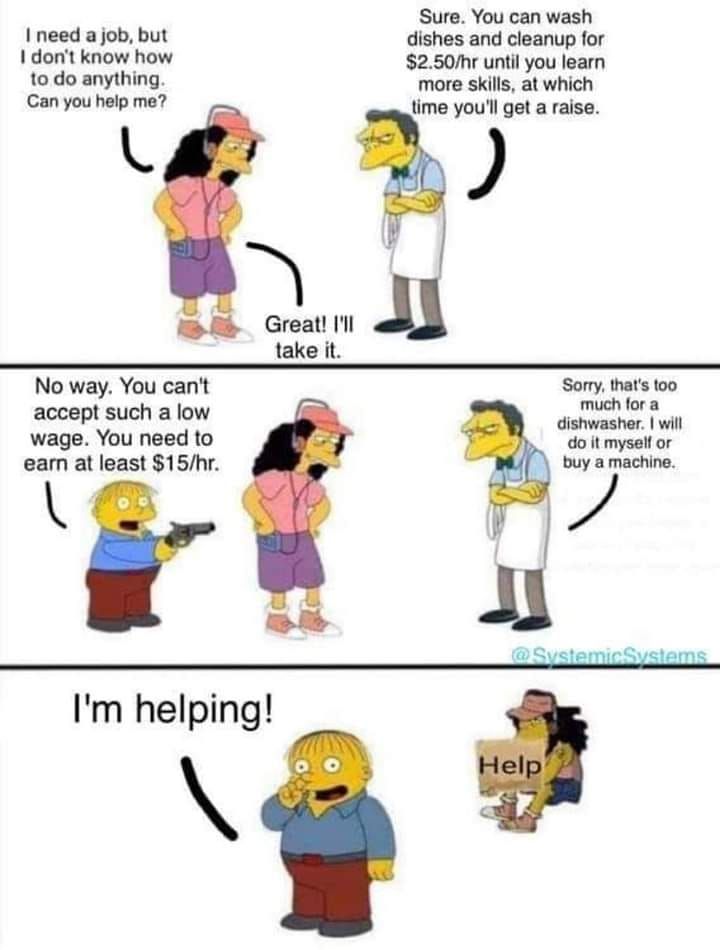