You’ve heard the news. Cities like Baltimore, New York, Detroit, and Chicago have a rat problem. Pres. Trump isn’t the first politician to make note of the problem. It’s not racist to point out that there’s a problem unless rat problems are associated with a particular race. Race doesn’t have anything to do with it.

Everyone from Bernie Sanders and the former mayor of Baltimore to Democrat Rep. Elijah Cummings has made note of Baltimore’s rat problem. Cummings said the following in a 1999 Congressional hearing: “I left my Baltimore a drug-infested area," he said.

The Baltimore Sun has tried to divert attention from Baltimore by claiming that Washington, D.C., has a bigger rat problem. The biggest Democrat-controlled cities have a rat problem that’s tied to their governing policies.

It’s true: Baltimore ranked No. 9 on Orkin’s list of American cities with the worst rat problems in 2018. But so is this: Washington, D.C., ranked No. 4.

While Baltimore’s rat population seems to have decreased in recent years, experts say the neighborhoods struggling with rodents are often victims of poverty, discriminatory housing policies and problematic urban planning.

As difficult as blacks had it during the time of segregation, a distinctly black culture developed, even in the prevalence of racist attitudes and restrictive laws. “Because Washington was a segregated city, blacks simply created their own metropolis. . . . The first black bank, the Industrial Savings Bank, was started here.” While “the black population of New York’s Harlem inherited many of its buildings from previous white owners, . . . many of the buildings in Shaw were paid for by black businessmen and built by black hands.” [1]

Families were intact, the divorce and unwed mother rates were no different from that of white communities.

Look at photographs of the 1963 March on Washington led by Martin Luther King, Jr. Notice how everyone is dressed. Most of the men are wearing suits and ties. Many of the women are wearing hats, as are the men. There is a dignity about the crowd. 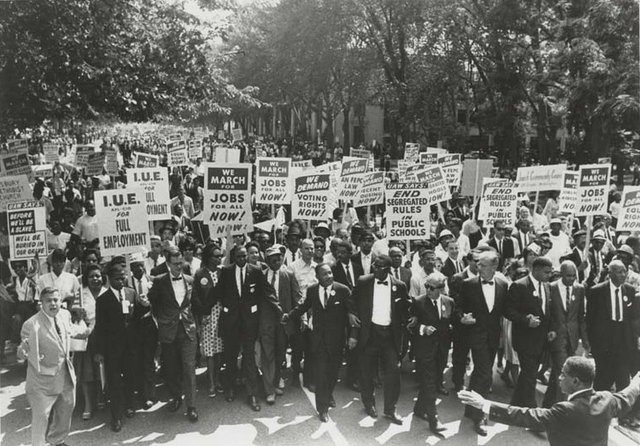 In the 1960s, Congress decided they were going to make poor people wards of the State and over time make them dependent on the government for all their needs. The war on poverty became a war on the poor. Many people lost their self-respect.

The way to fix the rat problem is to reestablish self-respect through self-government. Waiting for the government to fix things is not an option. Rep. Cummings has been a Congressman for more than 20 years. His solution has been to pour millions of dollars into Baltimore. What’s been the result?

Urban planning is not the solution; it’s the problem. The claim is often made that if something like the Waterfront area is developed or a new stadium is built, there would be a trickle-down effect. That’s not how economic prosperity works. Taking money from some people to be given to elites and their toys do not build communities.

Yes, there are absentee landlords and poor code enforcement. It wouldn’t take much money to enforce the codes and get the absentee landlords to do their jobs and honor contracts. If the landlords didn’t fix up their property, then put the properties up for sale with the proviso that all code violations must be fixed by the new owners.

The reason these things are not done is that they don’t generate any political sizzle.

The Democrats are the enemy of the poor. Democrats have used blacks as political pawns. Many black communities are still in poverty because of government programs. Why are their schools failing? Why is black unemployment still high? Why are blacks still killing other blacks? Why has the black family become fragmented?

Democrats view blacks as perpetual child-like victims. Only a few blacks can ever become independent, and these are the ones who keep their fellow blacks voting for Democrats.

Cory Booker, Dick Durbin, and Chuck Schumer are more concerned about illegal aliens then they are about their most loyal voting block — black Americans. Chicago, Philadelphia, Baltimore, Detroit, and numerous cities in New Jersey, where Booker once served as mayor of Newark, are evidence that Democrats treat blacks as wayward children in need of constant supervision.

Welfare programs have done a lot to keep black families down by subsidizing family fragmentation and fostering multi-generational dependency. Black problems aren’t solved by naming streets after Martin Luther King, Jr. The same can be said for the King Holiday and Black History Month. These are liberal crumbs to appease the black community, but have any of these actions helped blacks? Guilt-ridden whites vote for the advocates of government dependency, and anyone who does not will be labeled, you guessed it, a “racist.”

Subsidies have led to the immobility of the poor, the breakup of the black family, and dependency on government programs. There is little incentive to leave an area since the risks are seen as being too great. Star Parker, once trapped in the welfare cycle, writes:

Thirty-five years of Great Society social engineering have forced the disadvantaged to live under the control of the federal government. Politicians control their housing, food supply, schooling, wages, and transportation. A centralized government makes decisions about their childcare, healthcare, and retirement. [2]

This is not to say that blacks should imitate “white culture.” There is nothing inherently good in being white. Whites have similar pathologies. We’re all sinners. There is no inherently good black culture. Black is not always beautiful, and, of course, the same can be said for white culture, however it is defined. There’s a great deal of good in both cultures.