The exclusion of one God opens the door for the inclusion of another God. There is no such thing as religious neutrality. In the end, there will be a sovereign. That sovereign could show itself in the One State or the many individuals. The philosophy of Georg F. W. Hegel (1770-1831), followed by Marxists, Fascists, Nazis, and unbeknownst to many liberals, expresses the argument with chilling consistency: “The Universal is to be found in the State…. The State is the Divine Idea as it exists on earth…. We must therefore worship the State as the manifestation of the Divine on earth…. [T]he State is the march of God through the world.”

After compiling these statements from Hegel’s works, Karl Popper comments that Hegel’s views mandate the “absolute moral authority of the state, which overrules all personal morality, all conscience." ((Karl R. Popper, The Open Society and Its Enemies: The High Tide of Prophecy: Hegel, Marx, and the Aftermath, 2 vols. 5th rev. ed. (Princeton, NJ: Princeton University Press, [1966] 1971), 2:31.))

In an article I wrote some time ago titled “Don’t Let Critics Make the Rules,” I stated the following:

Let’s suppose that 3,000 years from now, after digging through tons of rubble, archeologists find a copy of the Declaration of Independence and the Constitution. One group called the Americanites points to these finds as valid historical evidence that there was a nation called the United States of America. Another group calling themselves the Englishites insists that there was no independent American nation but only an English colony named America. When the Americanites point to these recently discovered copies of the Declaration of Independence and Constitution as evidence of an independent American nation, they are immediately told that the documents are not evidence because they support what must first be proved.

I use this analogy to show that a historical document can’t be dismissed just because it supports what must first be proved. Critics of the Bible dismiss the Bible as evidence because the Bible supports what’s in the Bible. How could it be otherwise? Should we dismiss the autobiography of Benjamin Franklin because Benjamin Franklin wrote it? Should we only trust a biography of Franklin written by a critic? This would be highly prejudicial, and it’s not the way historical research is done.

Some critics of the Bible dismiss it as reliable history because it presupposes the existence of God (Gen. 1:1) and includes references to supernatural events. Such a view is the basis of “philosophical naturalism” that “restricts all of reality and everything that exists to explanations that are ultimately reducible to material properties.” ((Eddie N. Colanter, “Philosophical Implications of Neo-Darwinism and Intelligent Design: Theism, Personhood, and Bioethics,” Intelligent Design 101: Leading Experts Explain the Key Issue, ed. H. Wayne House (Grand Rapids, MI: Kregel Publications, 2008), 163.)) Philosophical naturalism leads directly to methodological naturalism whereby science confines “all scientific methodologies and empirical explanations within the scope of random and undirected natural processes.” ((Colanter, “Philosophical Implications of Neo-Darwinism and Intelligent Design, 162.)) When the evidential playing field is cropped this close, the game is over before it begins.

If philosophical and methodological naturalism are applied in other academic fields we are left with some rather embarrassing problems. Below is a response I received critical of my analogy by someone who seems to be unaware of the religious language of the Declaration of Independence and Constitution (this says nothing of other historical documents that reference God and Jesus Christ). I’m expecting to receive an email from him claiming that the use of God, Providence, Judge, and Creator in the Declaration are references to Deism and therefore don’t count.

This is a red herring. A belief in any type of God for an atheist would be a superstition not worthy of a scientifically reliable mind. While Deists might find the above references to a deity acceptable, so would orthodox Christians. Providence is fundamental to biblical Christianity. The Westminster Confession of Faith (1646) includes an entire chapter on the doctrine (Chapter V: On Providence). The use of “God,” “Creator,” and “Judge” (Gen. 18:25) are not foreign to the Bible but are to Deism.

Typical apples to oranges comparison here. The Declaration of Independence and the Constitution do not contain absurd and unbelievable fictional tales that would lend doubt to their veracity. In fact, in the Constitution, there is NO mention of God or any other magical beings so the future people finding it would know it was probably written by sane thinking people in light of the other nonsense they might have found, like Bibles for instance!

I chose the Declaration specifically because I anticipated the above response from the above critic (he writes me very, very often). Since “God” is a “magical being” only believed in by superstitious people of a pre-scientific era, America’s two founding documents lack “veracity.” The Declaration of Independence mentions “the Laws of Nature and of Nature’s God” who is the “Creator” and “the Supreme Judge of the world.”

This language was common in the 17 and 18th centuries. It was used by John Locke (1632–1704): “Human laws are measures in respect of men whose actions they must direct, howbeit such measures they are as have also their higher rules to be measured by, which rules are two, the law of God, and the law of nature; so that laws human must be made according to the general laws of nature, and without contradiction to any positive law of scripture, otherwise they are ill made. ((Locke, Two Treatises on Government, Bk II, sec. 135, quoting Hooker, Ecclesiastical Polity, 1.iii, § 9.)) 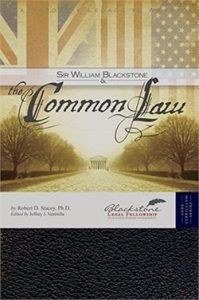 William Blackstone (1723–1780), author of Commentaries on the Laws of England (1765–1769), writes in a similar way (Book I, part I, sec. ii): “Man, considered as a creature, must necessarily be subject to the laws of his Creator, for he is entirely a dependent being. . . . And consequently, as man depends absolutely upon his Maker for everything, it is necessary that he should, in all points, conform to his Maker’s will. This will of his Maker is called the law of nature. . . . This law of nature, being coeval [existing at the same time] with mankind, and dictated by God himself, is of course superior in obligation to any other. It is binding over all the globe in all countries, and at all times: no human laws are of any validity, if contrary to this; and such of them as are valid derive all their force and all their authority, mediately or immediately, from this original. . . . The doctrines thus delivered we call the revealed or divine law, and they are to be found only in the holy scriptures. These precepts, when revealed, are found upon comparison to be really a part of the original law of nature, as they tend in all their consequences to man’s felicity. . . . Upon these two foundations, the law of nature and the law of revelation, depend all human laws; that is to say, no human laws should be suffered to contradict these.”

Those who signed the Declaration relied “on the protection of Divine Providence.” This means, following the critic’s logic, the Declaration could not be put into evidence in support of America’s founding since it includes references to a “magical being” and the absurd notion of creation. How could such a document be trusted on other points when it contains these obvious “myths”?

The above skeptic argues that “there is NO mention of God” in the Constitution. While the Declaration mentions God in general, the Constitution is much more explicit: “Done in convention by the unanimous consent of the states present the seventeenth day of September in the year of our Lord one thousand seven hundred and eighty-seven and of the independence of the United States of America the twelfth.”

The use of “our Lord” is a reference to Jesus Christ. How could such a document be accepted into evidence, given atheistic assumptions, when those who wrote the Constitution believed in a person who never existed?

If the Bible can’t be used as evidence because it mentions God, then neither can the Declaration of Independence and the Constitution be used to defend the proposition that they proclaim a political break from Great Britain since they also mention the “fiction” of God and the “superstition” of creation.