The clergy helped lead the resistance and independence movement in America in the eighteenth century. They were often described as the “black regiment” because of the black robes they wore while preaching. Before marching off to join Washington’s army, Lutheran pastor John Muhlenberg delivered a powerful sermon from Ecclesiastes 3:1–8 that concluded with these words:

Then Muhlenberg took off his clerical robe to reveal the uniform of a Virginia colonel. Grabbing his musket from behind the pulpit, he donned his colonel’s hat and marched off to war. 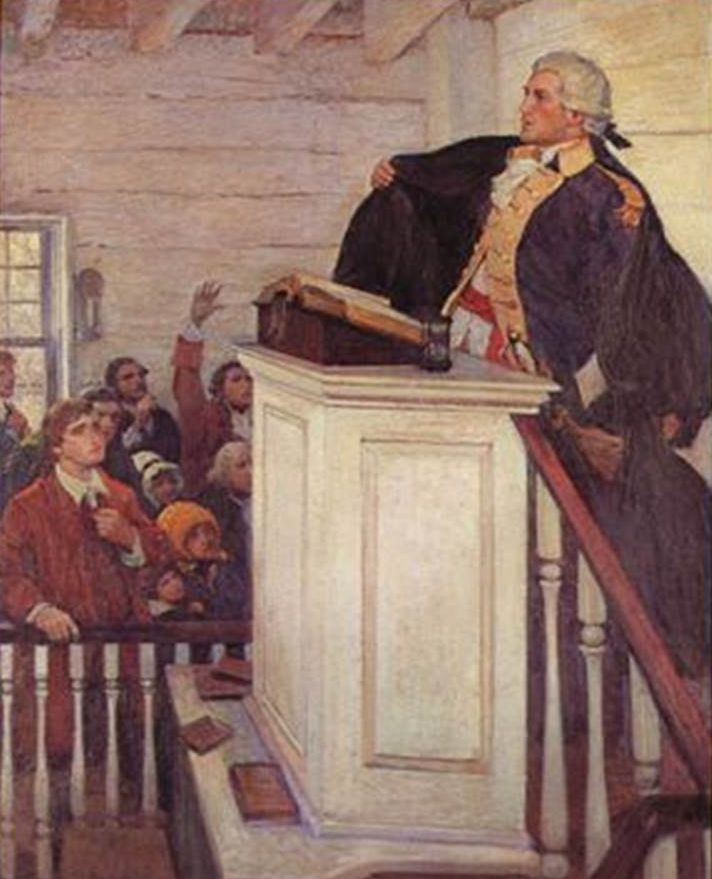 Can you imagine what our nation would be like if ministers stood up in the pulpit and became a voice of reason and rectitude? There are tens of thousands of churches in the United States made up of tens of millions of people who are generally conservative in their political views. Many of them don’t vote. Many who do vote don’t know the basics of civil government and the limits of political power.

Ministers were the primary educators in the American colonies. “No other thinker had such a wide audience as did the preacher in his pulpit, and his printed sermons and treatises were the staple reading matter of his parishioners.” ((Richard B. Schlatter, The Social Ideas of Religious Leaders, 1660–1688 (New York: Octagon Books, [1940] 1971), v.)) When the preacher delivered his message, the community at large was impacted by it. “On Sundays, ministers would be gospel heralds proclaiming the way of personal salvation through faith in Christ.” ((Harry S. Stout, The New England Soul: Preaching and Religious Culture in Colonial New England (New York: Oxford University Press, 1986), 27.)) These same ministers would use weekdays, as the occasion required, to become “social guardians telling the nation who they were and what they must do to retain God’s special covenant interest.” ((Stout, The New England Soul, 27.)) There was duty involved in the Christian life.

Throughout the colonies leading up to the drafting of the Declaration of Independence, ministers regularly delivered sermons on various occasions that addressed the political affairs of the day. The most common type was the Election Day sermon, which was preached every year in the presence of the governor and the newly elected members of the legislature reminding them of their duties as civil magistrates and the requirement that they act virtuously and justly in their public office.

Election Day sermons were the primary vehicle used by pastors in New England to articulate their political ideals and justify resistance to British oppression. This is a far cry from today when pastors are counseled to avoid preaching on politics because the ACLU or the IRS might knock on their door. There was greater fear in the eighteenth century. A British soldier might come knocking and haul you off on the charge of treason.

By April 1775, the clergymen of America were not only solidly behind the defensive efforts of the colonial leaders, but they were leading the charge against the British. Ministers called on their congregations to take up action and encouraged them to “obey God rather than men.” Many pastors left their pulpits and took up arms and led the men of their congregations into battle.

There is no need to take up arms today. We have all we need to turn our nation around if we have the will to do it. The voting booth is just a few steps away. If your pastor is not willing to speak out and speak up on the issues of the day, it might be time to find a different pulpit to sit under.

Frederick Douglass said, “A man’s rights rest in three boxes. The ballot box, the jury box, and the cartridge box.” The late Georgia Congressman Larry McDonald, who died in the shootdown of Flight 007 by the former Soviet Union in 1983, added a fourth: “There are four boxes to be used in the defense of liberty: soap, ballot, jury, and ammo. Please use in that order.”

Here’s how the four boxes in the defense of liberty have been described: 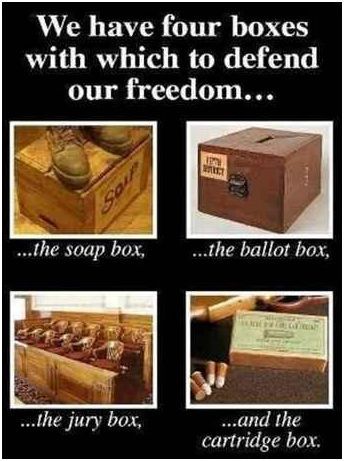 There’s no excuse. We can win back our country when we stand on the first three boxes. We still have those freedoms. We hope and pray we don’t need the fourth box.