In October 2017, the Fourth Circuit Court of Appeals ruled that publicly funded maintenance of the Brandenburg Peace Cross Memorial was unconstitutional because it “excessively entangles the government in religion because the cross is the core symbol of Christianity and breaches the wall separating church and state.”

Beginning in 1774, Congress appointed chaplains for itself and the army. It sponsored the publication of a Bible. Christian morality was adopted by the armed forces, and public lands were made available to promote Christianity among the Indians. John Adams, representing Massachusetts, and George Washington, representing Virginia, were present at these early congressional meetings.

On March 16, 1776, “by order of Congress” a “day of Humiliation, Fasting and Prayer” where people of the nation were called on to “acknowledge the overruling providence of God” and bewail their “manifold sins and transgressions, and, by a sincere repentance and amendment of life, appease his righteous displeasure, and, through the merits and mediation of Jesus Christ, obtain his pardon and forgiveness” was established. ((Original document can be viewed at http://1.usa.gov/aOwYxM))

Congress set aside December 18, 1777, as a day of thanksgiving so the American people “may express the grateful feelings of their hearts and consecrate themselves to the service of their divine benefactor” ((In another context, “divine benefactor” would be viewed as a deist ascription to an unnamed deity. It’s obvious that in this context the Christian God is in view.)) and on which they might “join the penitent confession of their manifold sins . . . that it may please God, through the merits of Jesus Christ, mercifully to forgive and blot them out of remembrance.”

Congress also recommended that Americans petition God “to prosper the means of religion for the promotion and enlargement of that kingdom which consists in righteousness, peace and joy in the Holy Ghost.” ((A copy of the original document can be viewed at http://1.usa.gov/4JgH3j. The proclamation can also be seen in Gary DeMar, America’s Christian History (Powder Springs, GA: American Vision, 2005), 252.))

George Washington was called upon by Congress, after the drafting of the First Amendment, to proclaim a National Day of Prayer and thanksgiving. The resolution read as follows:

That a joint committee of both Houses be directed to wait upon the President of the United States to request that he would recommend to the people of the United States a day of public thanksgiving and prayer, to be observed by acknowledging, with grateful hearts, the many signal favors of Almighty God, especially by affording them an opportunity peaceably to establish a constitution for their safety and happiness.

Constitution and then thanked Him for giving them the opportunity to establish it. Also, Two chaplains were appointed, one to the House of Representatives and one to the Senate, with a salary of $500 each with no thought of violating the Constitution.

With this brief history and a lot more, one wonders how a memorial cross would be considered unconstitutional. The following is an article by Jerry Newcombe. – Gary DeMar 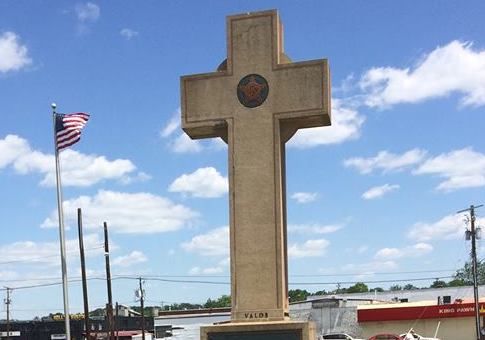 The Supreme Court’s Brandenburg Peace Cross Memorial decision was a major case for religious liberty. Perhaps it even spells the death knell of the so-called Lemon Test … an aptly-named decision from the early 1970s that has often been used against any religious expression in the public square.

The Supreme Court ruled that the memorial cross in the state of Maryland was not unconstitutional. The cross was built beginning in 1919 to commemorate many soldiers from Prince George’s County who died in service to their country in World War I.

The American Humanist Association (AHA) sued to have the cross torn down. The 4th Circuit Court of Appeals (out of Richmond, Virginia) agreed with the AHA, and the cross had a sentence of death hanging over it. First Liberty Institute, which fights for religious liberty (including many military-oriented cases), fought to save the cross, on behalf of the American Legion. Perhaps surprisingly, the Supreme Court decided by a comfortable 7-2 margin.

The author of the decision was Justice Samuel Alito, who wrote, “A government that roams the land, tearing down monuments with religious symbolism and scrubbing away any reference to the divine will strike many as aggressively hostile to religion.”

Writing for the dissenting minority – just herself and Justice Sonia Sotomayor – Justice Ruth Bader Ginsberg argued: “the principal symbol of Christianity around the world should not loom over public thoroughfares, suggesting official recognition of that religion’s paramountcy.”

After the victory, I interviewed constitutional attorney Jeremy Dys for a radio segment. Dys serves as the Deputy General Counsel for First Liberty, the legal organization that helped procure the victory on behalf of the American Legion.

Dys told me, “It’s a landmark victory for religious freedom…. Whatever detractors are saying, they no longer have a tool in their arsenal so they can twist the establishment clause of the Constitution to render memorials like this Bladensburg World War I veterans memorial obsolete and then take a wrecking ball to it.”

With this decision, he says, the Supreme Court is now protecting religious monuments: “That area of the law is kind of settled at this point, and we’re grateful that the Supreme Court has seen fit to protect what was the vision of some mothers back in 1919 as a way to remember their sons for serving in our armed forces.”

Dys continues: “The day and age when [they] can weaponize the establishment clause to bulldoze memorials just because they are religious [and are] on public property are over.”

Dys feels that this decision effectively replaces the Lemon test with something he calls “the American Legion Test” (after the organization that built the monument and fought for it in the Supreme Court case). According to that test, if a religious symbol has longstanding significance in America’s history and tradition, it has the “presumption of constitutionality.” He notes that there are now six justices saying that the Lemon Test is bad law.

That is very significant going forward. Through this decision, things like “In God We Trust” on our money or displayed on our walls in public buildings would also be protected.

Dys also notes that the American Legion deserves a lot of credit in this case: “We have been working with them for about 15-20 years now, protecting monuments that have religious imagery in them…. These war heroes have been working with us for years to preserve these monuments. And if you’re one of those guys or gals from the American Legion…I just want to say: Mission Accomplished.”

This new victory would have allowed another World War I cross to stand, without having to change ownership of where it stands. In that case from a few years ago, First Liberty worked to save a memorial on public land in the Mojave Desert. A judge ruled that that cross must be covered up with a canvas bag which was padlocked and then later covered up by a plywood box. “Why?” one might ask. So the spiders and snakes and occasional hikers could not see it? It was in the middle of nowhere. That cross ultimately was allowed to stay only because the land it stood on became privatized through a land-swap.

Just as Dracula flees from the cross, so there are many atheistic legal groups in America (like the American Humanists Association) that fight the cross at every turn – even when it is a symbol of those who paid the ultimate price for our country. Thank God the cross in the crosshairs still stands.