On June 5-7, 2019, I spoke at the Biblical Worldview Student Conference held at Milligan College in Johnson City, TN. Two of my messages were on eschatology. I emphasized the importance of biblical optimism during attack and persecution. Young people need to believe there is a future waiting for them, that not everything is gloom and doom and escapism.

To be overly preoccupied with the future at the expense of the present is to replace discipleship with dreaming. God, the source of all hope, also is the source of the commission for believers to go into all the world as redemptive forerunners of the future that already is breaking into the present, first through the life, death, and resurrection of Jesus, and now through the ministry of the spirit of the Christ and the faithfulness of the people of the Christ, the church. To be with God tomorrow requires being about God’s business today! In New Testament thought, serious discipleship takes priority over speculative dispensationalism; the significance of Pentecost far outweighs that of Christian ponderings about purgatory, premillennialism, and the perseverance of the Saints. The call from the future of God and the foundation for participating in God’s future focus on the present work of the Spirit in fashioning new creations fit for the tasks at hand in the future yet to be.

The new generation, now being called Baby Busters or Generation X, features people with a lack of hope. These millions of young adults tend to live only for the moment and often feel disconnected from others. They are pessimistic about the future and have learned not to trust anyone who offers absolute answers on major questions about life and the future.1 If Christianity has the right answers, they often asked, why can it not keep its own house in order? Is not the world of Christians divided, scandal-ridden, and escapist, just more of the problem? They deserve an answer. The biblical answer centers in a right understanding of Christian eschatology — and then, of course, a putting of that understanding into beneficial practice in today’s world. In the biblical view, a focus on final things is never to be disconnected from a commitment to present responsibilities in light of those final things.2

This is not a popular opinion. Prophecy writers and worldview dualists often dismiss the importance and sacredness of the here and now. Everything God created is good (Ge. 1:31; 1 Tim. 4:4) when approached in a spirit of prayer and conformity to God’s Word.

We wouldn’t be here if it weren’t for Christians who had an optimistic eschatology even if they could not articulate how they obtained it.

Many Christians err by asserting that this life and the world in which we live count for very little. But this world does count. “The earth is the LORD’s and all that it contains” (Ps. 24:1). As “fellow‑heirs with Christ” (Rom. 8:17), we possess, as a stewardship, this world. God’s gift of a good creation (Gen. 1:31; 1 Tim. 4:1-5) requires righteous stewardship. The world and this time are not to be despised. This world and this time are the domains of God’s redemptive work. Until God decides to do something with us personally, this world and time are the only places where we can work out our salvation with fear and trembling.

“The introduction of mechanical movable type printing to Europe” by Johannes Gutenberg (c. 1398-1468) “started the Printing Revolution and is widely regarded as the most important invention of the second millennium, the seminal event which ushered in the modern period of human history. It played a key role in the development of the Renaissance, Reformation, the Age of Enlightenment, and the scientific revolution and laid the material basis for the modern knowledge-based economy and the spread of learning to the masses.”

If you wanted a pamphlet or book copies, you had to hire someone to make a hand-written copy. For approximately 4,500 years before Gutenberg invented the printing press, books were produced by hand. They were written on surfaces of clay, papyrus, wax, and parchment. Law books, cookbooks, works of philosophy and science, great comedies and tragedies were all painstakingly copied, and all too often were lost through war and neglect.

There were very few Bibles, and the Bibles that were available were often under lock and key by the authority of the Roman Catholic Church. The moveable type printing press changed everything. There were no longer any information gatekeepers.

It has been estimated that there were perhaps 30,000 books in all of Europe before Gutenberg printed his Bible; less than 50 years later, there were as many as 10 to 12 million books. Printing technology has changed in dramatic ways in just the last 30 years. Now anyone can be an author and publisher.

Natural philosopher, chemist, physicist, and inventor Robert Boyle (1627–1691) spent a portion of his fortune “to have the Bible translated into various languages” and worked with the created order for the good of humankind.

In his will and testament, Boyle “addressed his fellow members of the Royal Society of London, wishing them all success in ‘their laudable attempts, to discover the true Nature of the Works of God’ and ‘praying that they and all other Searchers into Physical Truths’ may thereby add ‘to the glory of the Great Author of Nature, and to the Comforter of mankind.’”3 This is postmillennial thinking in action.

The title of one of Boyle’s many books was The Christian Virtuoso, that is, “The Christian Scientist.” Boyle was not a single Christian voice crying in the wilderness of secular science. The membership of the Royal Society was made up of many Christians who shared Boyle’s view that “the world was God’s handiwork” and “it was their duty to study and understand this handiwork as a means of glorifying God.”4

On the archway above the wooden door of the Cavendish Laboratory, at Cambridge University, there is a Latin inscription that reads, Magna opera Domini. Exquista in omnes voluntates ejus.

The inscription had been placed there at the insistence of the physicist James Clark Maxwell, the first Cavendish professor in 1871. The inscription quotes a Psalm that reads, “Great are the words of the Lord, sought out by all who take pleasure therein.” The inscription summarized Maxwell’s inspiration for scientific study: the thought that works of nature reflect the work of a designing mind. In this belief he had been joined by many of the leading scientists of Western civilization for over four hundred years — Copernicus, Kepler, Ray, Linnaeus, Curvier, Aggassiz, Boyle, Newton, Kelvin, Farady, Rutherford — on and on the list could go.”5

Samuel F.B. Morse (1791-1872), “after having established his reputation as a portrait painter, in his middle age … contributed to the invention of a single-wire telegraph system based on European telegraphs. He was a co-developer of the Morse code, and helped to develop the commercial use of telegraphy.” 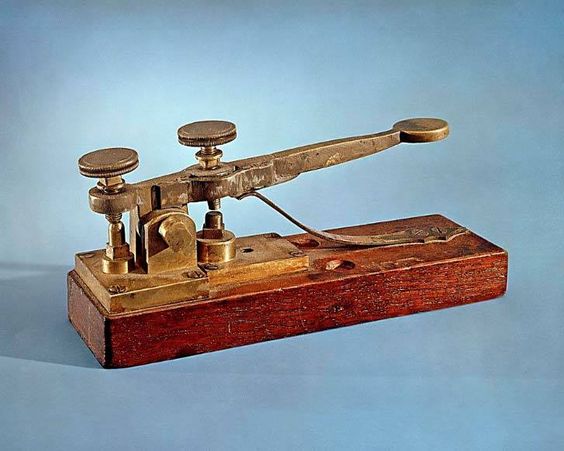 “While Morse was painting a portrait of Lafayette, a horse messenger delivered a letter from his father that read, ‘Your dear wife is convalescent.’ The next day he received a letter from his father detailing his wife’s sudden death. Morse immediately left Washington for his home at New Haven, leaving the portrait of Lafayette unfinished. By the time he arrived, his wife had already been buried. Heartbroken that for days he was unaware of his wife’s failing health and her death, he decided to explore a means of rapid long-distance communication.” This happened in 1825.

In 1832, the first message sent over Morse’s telegraph from Washington, DC, to Baltimore, Maryland, was, “What hath God wrought?” (Num. 23:23). What has GOD brought to pass? Overnight, the speed of information went from a few miles per hour – train, horseback, walking – to 186,000 miles per second and hasn’t gotten any faster since. The devices used to transmit voice and data were the stuff of science fiction in Morse’s day and beyond.

In 1858 Cyrus West Field (1819-1892) and the Atlantic Telegraph Company laid the first transatlantic telegraph cable along the floor of the Atlantic Ocean. On August 16, 1858, the first message sent via the cable was, “Europe and America are united by telegraphy. Glory to God in the highest; on earth, peace and good will toward men.” Modern-day science is built on the shoulders of Christian scientists who believed in the regularity and predictability of the created order because there was a Creator behind it all and a future to create into.

Compare what these men did in terms of their faith with the following:

John Nelson Darby, the founder of dispensational premillennialism and the pre-tribulational “rapture” of the church doctrine, the basis of the Left Behind series, taught that “the imminent return of Christ ‘totally forbids all working for earthly objects distant in time.’”6 This would have included the study of mathematics, medicine, art, music, and the sciences unless there were “immediate spiritual results.”7

Optimism about the future no matter world conditions were swirling around, what the newspaper headlines read, technical obstacles, or the seemingly impossible moral climate, Christians have always forged ahead.

One rather frightening by-product of this process of interpretation is that it is so easy to create the very situation which is being described so that the interpretation given brings about its own fulfillment. Russia, for example, is to be destroyed by nuclear attack — and Scripture must be fulfilled! It needs little imagination to understand the consequences of such a belief, especially if held with deep conviction by politicians in the military who have the power to press the button and to execute the judgment thus prophesied and foreordained.8

We should follow their example. Instead, secularists have done a better job because they did not view time or creaturely limitations to be roadblocks to cultural advancements. The co-opted the fundamental principles of a classic Christian worldview and secularized it and turned it against us.