Liberals have attacked the use of “thoughts and prayers” when some tragedy strikes. Sometimes there’s nothing that can be done at the moment so people offer a statement of comfort in the only way they can. This does not mean that nothing is to be done.

Thoughts, prayers, and well-wishing are not complete until they are backed up with action when there is some action that can be taken. The same is true of faith:

What use is it, my brethren, if someone says he has faith but he has no works? Can that faith save him? If a brother or sister is without clothing and in need of daily food, and one of you says to them, “Go in peace, be warmed and be filled,” and yet you do not give them what is necessary for their body, what use is that? Even so faith, if it has no works, is dead, being by itself. But someone may well say, “You have faith and I have works; show me your faith without the works, and I will show you my faith by my works.”You believe that God is one. You do well; the demons also believe, and shudder. But are you willing to recognize, you foolish fellow, that faith without works is useless? Was not Abraham our father justified by works when he offered up Isaac his son on the altar? You see that faith was working with his works, and as a result of the works, faith was perfected; and the Scripture was fulfilled which says, “AND ABRAHAM BELIEVED GOD, AND IT WAS RECKONED TO HIM AS RIGHTEOUSNESS,” and he was called the friend of God. You see that a man is justified by works and not by faith alone. In the same way, was not Rahab the harlot also justified by works when she received the messengers and sent them out by another way? For just as the body without the spirit is dead, so also faith without works is dead. (James 2:14-26).

It would not have been enough for Rahab only to pray. There was something she could do to save the life of the spies. That’s what she’s praised for.

The publishing phenomenon of 2000 was Bruce Wilkinson’s The Prayer of Jabez: Breaking Through to the Blessed Life (Multnomah). The premise of the book is based on 1 Chronicles 4:9–10:

Jabez was more honorable than his brothers, and his mother named him Jabez saying, “Because I bore him with pain.” Jabez means “pain” in Hebrew. Now Jabez called on the God of Israel, saying, “Oh that You would bless me indeed and enlarge my border, and that Your hand might be with me, and that You would keep me from harm that it may not pain me!” And God granted him what he requested. 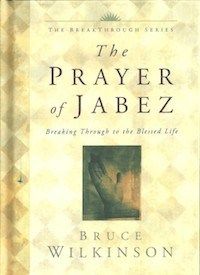 The Prayer of Jabez had sold around ten million copies, not counting numerous spinoffs “including key chains, mugs, backpacks, Christmas ornaments, scented candles, mouse pads, and a framed artist’s conception of Jabez himself.” Nothing is said of Jabez either before or after his prayer.  Wilkinson makes the point that for the Holy Spirit to single out an obscure figure with no special pedigree, God must have meant for Jabez’s prayer to be prayed, meditated over, and acted on.

Any time millions of people decide to read a book, you can be sure that its message is touching a nerve. The same is true for Rick Warren’s The Purpose Driven Life. It’s hard to criticize books that encourage Christians to pray and to pray boldly and to seek divine purpose in their lives. But are these books bold enough?

So why am I bringing up a book written nearly 20 years ago that has been criticized and praised by dozens of others?

First, I was reminded of it when I saw an advertisement for the book The Promise of Jonadab written by E. Ray and Gail Pinkney Moore. A promotional blurb on World Net Daily’s (now WND) site wondered if it might be “The Next ‘Prayer of Jabez.’”

Second, what good did praying the prayer of Jabez do for the millions of Christians who bought it and determined to live by its precepts? Was praying all that was required?

Third, what effect has praying the prayer of Jabez had on the families of those who read and prayed the prayer? Was praying all that was required?

Fourth, what impact has it had on our nation? Was praying all that was required?

Fifth, what did those who prayed the prayer of Jabez understand by Jabez’s request to “enlarge my border”?

There are many prayers recorded in the Bible. Dr. Herbert Lockyer, who wrote All the Prayers of the Bible, counted 650 individual prayers (exclusive of the Psalms since it’s a single prayer book) “of which no less than 450 have recorded answers.” Why so much attention to the prayer of Jabez and not some of the other 649 prayers? Again, I don’t want to be critical here, but I believe the prayer of Jabez, as understood by those who were introduced to it by Wilkinson’s book, saw it as primarily individualistic (what can God do for me?) and somewhat incantational. A person could pray the prayer without ever contemplating how God might be telling the petitioner to apply the concept of enlarged borders to spheres of influence like education, politics, film, and journalism, to name just four worldview areas.

You see, it’s not enough to pray. If I call on God to prosper me financially and yet do not hunt for a job and then work the job that I get, then I am not really praying the prayer of Jabez (or any other prayer for God to prosper me).

How many people expected God to do something because they prayed the prayer, and when God did not respond in a way they expected Him to respond, they stopped praying the prayer? Bruce Wilkinson acted on the prayer he prayed. With the considerable profits he received from The Prayer of Jabez, he moved to Africa and started an organization called Dream for Africa. I suspect that he incorporated what he knew about God and the rest of the Bible by putting his prayer of faith into action. Prayer alone is usually (mostly) not enough, as his experience in Africa demonstrates. The prayer of Jabez was not an incantation for success, a “name it and claim it” prosperity prayer.

Before long, Wilkinson walked away from the project for a number of reasons. You can read about it here and here. Loren Davis' article “The Race for Africa” is very good.

Consider one of Joshua’s prayers. Israel won its first encounter with Jericho without a casualty. Why should the battle with Ai be any different? The spies thought Ai was weak enough that only “two or three thousand men need go up” (Josh. 7:3). Thirty-six Israelites were killed, and the rest were pursued and assaulted by the men of Ai with the result that “the hearts of the people melted and became like water” (v. 5; cf. Josh. 2:9, 11; 5:1). This would have been a perfect time for the prayer of Jabez—a literal fulfillment to “enlarge my border.”

“Then Joshua tore his clothes and fell on the earth on his face before the ark of the LORD until evening, both he and the elders of Israel” (Josh. 7:7).

In a word, they prayed … hard. What did God tell Joshua to do? “So the LORD said to Joshua, ‘Rise up! Why is it that you have fallen on your face? Israel has sinned, and they have also transgressed My covenant which I commanded them’” (7:11). In effect, God told Joshua for the moment to stop praying and to act on the evil that brought them the defeat! Praying was not enough even though it was the first step. To change Africa, as Wilkinson learned the hard way, would require changing everything.

Like the prayer of Jabez, there is an “expand my border” petition in the “Lord’s Prayer”: “Thy kingdom come. Thy will be done on earth, as it is in heaven” (Matt. 6:10). When we pray this part of the longer petition, do we sit back and wait for God’s kingdom to come or do we engage the precepts of the kingdom under the direction of God’s Word and His assurance that it will happen?

Some might object that we can’t make the kingdom of God come. So when we pray to God for our daily bread (6:11), do we wait for it to fall from heaven like manna fell each day in the wilderness for 40 years (Ex. 16:23–26; Num. 11:7–9)? As soon as Israel entered the Promised Land, they had to work for their bread (Josh. 5:10–12). In the New Testament we are told that if we don’t work, we don’t eat (1 Thess. 4:11; 2 Thess. 3:10). How can this be if praying for our daily bread is guaranteed by the recitation of the prayer? The same is true about God’s kingdom coming. We are to pray and work for its manifestation.

One way to avoid the kingdom implications of the prayer that Jesus tells us to pray is to claim that presently it’s a spiritual kingdom that will only have substantive, this-world manifestation sometime in the future, either in an earthly millennium or the inauguration of the New Heavens and the New Earth. This way, it’s safe to pray the prayer Jesus wants us to pray since there’s nothing anyone has to do about the kingdom since it is solely the work of God. We can only pray that it comes, that God’s will be done on earth as it is in heaven. Try that with the bread portion and see how long you last.

They went to the entrance of Gedor, even to the east side of the valley, to seek pasture for their flocks. They found rich and good pasture, and the land was broad and quiet and peaceful; for those who lived there formerly were Hamites. These, recorded by name, came in the days of Hezekiah king of Judah, and attacked their tents and the Meunites who were found there, and destroyed them utterly to this day, and lived in their place, because there was pasture there for their flocks. From them, from the sons of Simeon, five hundred men went to Mount Seir, with Pelatiah, Neariah, Rephaiah and Uzziel, the sons of Ishi, as their leaders. They destroyed the remnant of the Amalekites who escaped and have lived there to this day.

These were men of action. They took risks for God’s kingdom. Simeon was a small tribe, but it did great things despite its size. Even though the tribe of Simeon did not begin well (Gen. 49:1, 5–7), it ended well: “[King Asa] gathered all Judah and Benjamin and those from Ephraim, Manasseh and Simeon who resided with them, for many defected to him from Israel when they saw that the Lord his God was with him” (2 Chron. 15:9).