Evangelicals are trying to wrap their heads around why a young man from a Bible-believing Christian family that belongs to a Bible-believing denomination could think that it was his moral duty to kill Jews. There’s a Bible precedent for it.

Jesus answered them, “Did I Myself not choose you, the twelve, and yet one of you is a devil?” Now He meant Judas the son of Simon Iscariot, for he, one of the twelve, was going to betray Him (John 6:70-71).

Judas was one of Jesus’ twelve apostles. He spent more than three years with Jesus, hearing His teaching, watching Him feed thousands, healing people, and even raising the dead. Even so, He betrayed Jesus with a kiss so that the Romans could arrest Him and eventually crucify Him. All the gospels mention the betrayal. It should not surprise us that someone going to church and sitting under solid teaching should betray that faith.

If there was a traitor and an accomplice to murder in Jesus' inner circle—one out of twelve—is it unfathomable to consider that there could be someone similar to Judas in a Bible-believing church?

And he went away and discussed with the chief priests and officers how he might betray Him to them. They were glad and agreed to give him money. So he consented, and began seeking a good opportunity to betray Him to them apart from the crowd (22:4-6).

Jesus mentions that “the hand of the one betraying” Him was among them at the Passover meal (24:21). While “Satan entered into Judas,” and it had been “determined” that the betrayal would take place, Judas was still responsible (24:22; Acts 1:16-20). There are examples of followers of the Way who abandoned the faith:

There is no direct statement explaining why Judas decided to betray Jesus. Judas was a flawed man, as were all of Jesus' disciples. He was a thief (John 12:6). His thievery, however, did not necessarily lead him to treachery and betrayal. We learn later that all the disciples abandoned Jesus, and Peter denied Him three times after assuring Jesus that he would die rather than deny Him (John 18:15-27). 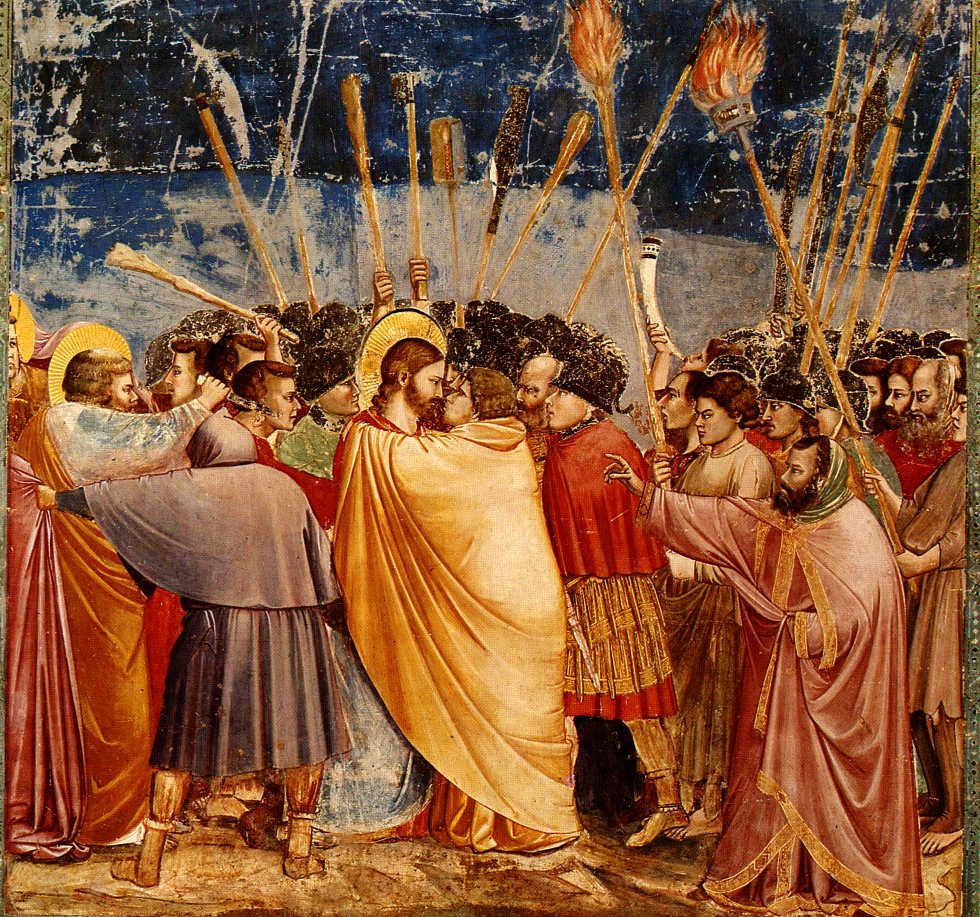 Judas betrays Jesus with a kiss.[/caption]

Some conjecture that Judas was trying to force Jesus’ hand, believing that Jesus had the means, the people, and the power to overthrow the Roman occupiers.

The week before Jesus is crucified, at the event we know as Palm Sunday, Jesus enters Jerusalem in triumph on the back of a donkey. The whole scene—with crowds assembled waving branches, a leader riding into the city, and the shouts of the people that Jesus comes in the name of the Lord—is reminiscent of a Roman Triumph, the celebratory ritual in which a great military leader was welcomed into the city in a procession. Everything about this moment suggests that Jesus is a political figure. Then Jesus proceeds to the Jewish Temple, where he overturns tables and throws out the money changers. To many people, but arguably especially the disciples, it seems as if things are about to happen. The revolution is beginning.

But nothing like that actually happens; there’s no rebellion. Jesus does not raise an army, organize troops, or even try to evangelize the pilgrims who were visiting Jerusalem for Passover.

At this juncture, maybe Judas is tired and disappointed and just wants to go home and try to pick up the pieces of his life. Alternatively, perhaps he thinks he can force Jesus’ hand and propel him towards a rebellion. If Jesus is arrested, one might imagine, maybe God will intervene. Perhaps Judas genuinely thinks that his actions will expedite the arrival of the Kingdom of God and is horrified at how things unfold? (Daily Beast. Emphasis added) 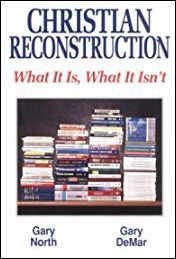 We don’t know for sure, but we do know that there are people who would like to grease the skids of revolution by any means possible, even violent ones, to make fundamental changes to society, no matter what the initial cost. The following is taken from Christian Reconstruction: What It Is. What It Isn’t, a book that Gary North and I co-authored in 1991, a book we wrote nearly 30 years ago!

In one of Gary North’s earliest books, Marx’s Religion of Revolution, he states that that “faithful men will remain orderly in all the aspects of their lives; they are not to create chaos in order to escape from law (Rom. 13; 1 Cor.14:40). It is reserved for God alone to bring His total judgment to the world.” In biblical terms, “it is God, and only God, who initiates the change.” ((North, Marx’s Religion of Revolution (Nutley, NJ: The Craig Press, 1968), 99. This quotation appears on page 86 of his 1989 updated edition published by the Institute for Biblical Economics.))

North has repeatedly made it clear that the kingdom of God advances ethically as the people of God work out their salvation with fear and trembling. Revolutionaries are lawless. Their time frame is short. In fact, one of Dr. North’s books, Moses and Pharaoh, is subtitled Dominion Religion Versus Power Religion. Power Religion, he writes,

is a religious viewpoint which affirms that the most important goal for a man, group, or species, is the capture and maintenance of power. Power is seen as the chief attribute of God, or if the religion is officially atheistic, then the chief attribute of man. This perspective is a satanic perversion of God’s command to man to exercise dominion over all the creation (Gen. 1:26-28). It is the attempt to exercise dominion apart from covenantal subordination to the true Creator God. What distinguishes biblical dominion religion from satanic power religion is ethics. (Gary North and Gary DeMar, Christian Reconstruction: What It Is. What It Isn’t (Tyler, TX: Institute for Christian Economics, 1991), 141-142.)) The Lord will exalt the faithful when He is ready, and when He knows we are ready. Our calling is to wait patiently, praying and preparing ourselves for that responsibility, and working all the while to advance His kingdom in every area of life

Historically, some Christians who lack this long-term hope have taken things into their own hands, inevitably with disastrous consequences. Far from advocating militancy, biblical postmillennialism protects against a short-term revolutionary mentality. Reconstructionists believe that Christians should follow the examples of biblical characters such as Joseph, Daniel, and Jesus Christ Himself. Joseph and Daniel both exercised enormous influence within the world’s greatest empires. But they attained their positions by hard work, perseverance in persecution and suffering, and faithful obedience.

Jesus Christ attained His throne by enduring the suffering of the cross. Christians are no different. We are not to attain positions of leadership by revolution or rebellion. Instead, we are to work at our callings and wait on the Lord to place us in positions of influence in His time. ((See David Chilton, Paradise Restored: A Biblical Theology of Dominion (Horn Lake, MS: Dominion Press, [1985] 2007);  The Days of Vengeance: An Exposition of the Book of Revelation (Horn Lake, MS: Dominion Press, [1987] 2006), 511-12; James B. Jordan, “Rebellion, Tyranny, and Dominion in the Book of Genesis,” in Gary North, ed., Tactics of Christian Resistance, Christianity and Civilization No.3 (Tyler, TX: Geneva Ministries, 1983), 38-80.))

Jesus said to His disciples, “If you love Me, you will keep My commandments” (John 14:15). John writes, “For this is the love of God, that we keep His commandments; and His commandments are not burdensome” (1 John 5:3). One of those commandments is, “You shall not murder” (Ex. 20).

Instead of chaos, the characteristics of true renewal or revival are law and order, and the respect of marriage, property, status, and authorities. For the religions of chaos, play and escape from work, is the first step towards renewal. For the biblical religion, faith requires law, work and order as the instrument of renewal. The answer is thus clear-cut. If man worships chaos, then social renewal for him requires revolution, the ritualistic and necessary rebirth of chaos in order to remake man and society…. But if man worships the biblical God, then the revolutionary faith in chaos is the epitome of evil, the essence of lawlessness, and, as the church fathers and theologians quickly saw it, the manifestation of antichrist.

We should not be surprised, therefore, that Marxists and other worshipers of chaos are committed to revolution even when the the peaceful take-over of a country is possible. Revolution must be created by mass liquidations and the destruction of all established law and order, including economic order. The “economics" of socialism (and welfare states) do not make sense because they are not intended to make sense: they are a defiance of the universe of God in the name of chaos. They invoke chaos as the highway to the golden age. If they fail, the guilt is not theirs. They blame the failure on residual areas and pockets of religion, law, and order, or property and national loyalty. Their solution therefore is to increase the chaos. Since their universe is a universe or chaos: their golden age can only come though planned chaos. Hence, they deny the validity of the biblical God; they cannot accept a world or moral and economic law. Their golden age requires the triumph of man over religion, over morality, and over economics. The liberation of man requires the systematic violation and destruction of every law sphere. (The Religion of Revolution (Victoria, TX: Trinity Episcopal Church, 1965), [3-4].))

The above was written by Rushdoony in 1965. It reads like it was written yesterday. Rushdoony described the disease and prescribed the antidote. Sadly, too many Christians rejected his diagnosis and treatment.