Any document can be made to say anything if a word or phrase is taken out of context. Ripped from its context, “judge not” (Matt. 7:1) means something different from the point Jesus was making in the next verse (7:2) and other verses (John 7:24). The apostle Paul had no problem judging the sexual behavior of someone in the church at Corinth (1 Cor. 5:1-2).

The Bible says, “there is no God” (Ps. 14:1), therefore, the Bible supports atheism, until the rest of the passage is read: “The fool says in his heart, there is no God.”

The same type of out-of-context mumbo-jumbo can be found with people who do not read the Constitution carefully. Consider the use of the word “welfare.” A Bernie Sanders supporter was asked about his thoughts on socialism in America. Here’s what he said:

“It says it right in the very, very beginning. The preamble of the Constitution says what our country is all about. ‘We the people in order to form a more perfect union, establish justice, insure domestic tranquility, and provide the general welfare.'… “Saying ‘general welfare’ is a socialist reality!" 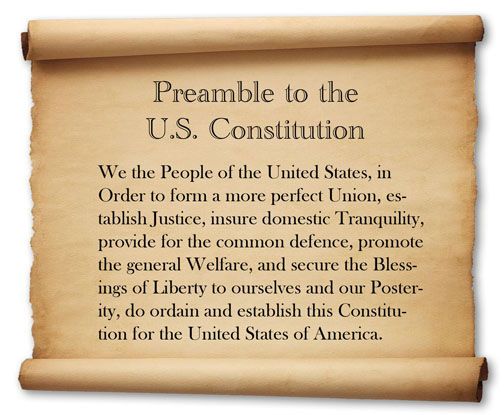 The assumption is that “general welfare” means wealth redistribution, something the Constitution does not say. Since the income tax amendment wasn’t ratified until 1913, it’s hard to make the case that our founders were pushing ways to abolish “wealth inequality” since there was no instrument to tax people unequally.

The “general welfare” clause appears again in Art. I, sec. 8 of the Constitution:

Second, it’s clear that the “general welfare” clause is not about wealth redistribution. There are 18 powers granted to the Federal government in the full context of Article 1, section 8 with no mention of wealth redistribution, education, retirement security, or healthcare.

As Rob Natelson put it in his paper, The General Welfare Clause and the Public Trust: “The clause was designed as a trust-style rule denying Congress authority to levy taxes for any but general, national purposes. Because the Clause prevented Congress from using tax revenue for local or special interest purposes, the Clause indirectly qualified the appropriation power. Even if some enumerated power could be enlisted to support the appropriation, federal tax money was not to be used for the private benefit of a museum-however worthy-in Savannah, nor an artist-however-struggling in New York.”

To take the clause as a general grant of power for the federal government to do anything that promotes the general welfare would, as Madison put it, “would be a metamorphosis of the Constitution into a character which there is a host of proofs was not contemplated by its creators.” (Tenth Amendment Center)

As James Madison made clear in Federalist 41, the phrase “general welfare” is immediately followed “and is not even separated by a longer pause than a semicolon.” He went on to state that “[n]othing is more natural nor common than first to use a general phrase, and then to explain and qualify it by a recital of particulars,” which the Constitution does. ((The Federalist No. 41: General View of the Powers Conferred by the Constitution (January 19, 1788).)) Read the list for yourself.

The thing of it is, so many people today (1) don’t read, (2) and if they read don’t understand what they read, and (3) don’t care what the facts are because their agenda trumps the facts and the law. If a man can become a woman and a woman a man then “general welfare” can mean socialism.

“General welfare” in constitutional terms means welfare that benefits everyone more or less equally and can only apply to enumerated powers of which there are very few. This can be clearly seen in providing “for the common Defense.” Taxes collected to defend the nation benefit everyone generally.

Taxing some people so other people can have decent housing or a college education or healthcare is not general welfare. Wealth redistribution, what Socialism is all about, is particular welfare, a form of theft. Taking money from some people so it can be given to other people is not what the constitution means by general welfare. The welfare State is contrary to the Constitution.