This is not enough evidence for Georgia Democrat state Rep. Dar’shun Kendrick. She has introduced a “Testicular Bill of Rights” to protest the Georgia House of Representatives' “heartbeat bill.” Here’s what it includes: 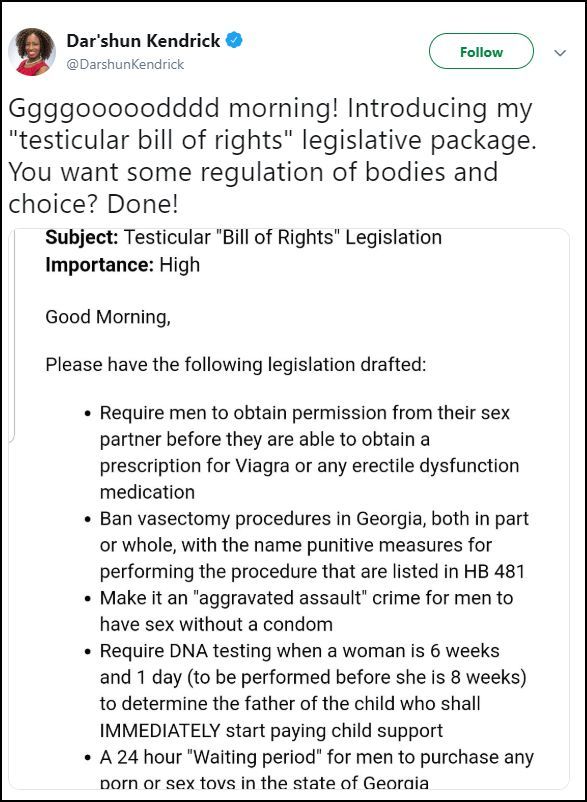 Kendrick told Rolling Stone that her point is to “bring awareness to the fact that if you’re going to legislate our bodies, then we have every right to propose legislation to regulate yours.”

Here’s the problem with her logic: Everything she’s trying to legislate for men relates to their body.

As I mentioned in the opening paragraph, a heartbeat is evidence of a living person. If there are two heartbeats, then there are two bodies. That’s called logic and biology.

Notice how early the unborn baby’s heartbeat can be detected:

No matter how many times a stethoscope is put on a man or his pulse is taken, there will only be one heartbeat. To attack that man premeditatively so his heart stops beating is a crime. It’s murder. How would Kendrick, a lawyer, deal with the deliberate act to stop a man’s heart in a court of law?

Kendrick is a staunch supporter of women having the right to kill their unborn children.

She stated that if she’s still an elected official in Georgia’s House of Representatives and the Democrats take over in 2020, the heartbeat bill will be the first bill she will work to overturn “if it’s not overturned already.”

Bald eagles have more protections from our government than unborn babies: “The Bald and Golden Eagle Protection Act was amended again with several different aspects such as increasing the civil penalties for violating provisions increased to a maximum fine of $5,000 and less than one year of imprisonment for the first conviction. If a second conviction occurs, a maximum fine of $10,000 and less than two years of imprisonment will take place…. The maximum amount of a misdemeanor offense was increased $100,000 under the Criminal Fines and Improvement Act of 1987. In addition, $250,000 will be fined for an individual for a felony conviction. Respectively, $200,000 and $500,000 will be fined in case of an organization for a misdemeanor and felony conviction.”