Secretary of State Mike Pompeo is coming under fire for a speech he gave in 2015 while serving as a Congressman:

“We will continue to fight these battles, it is a never-ending struggle… until the Rapture.”

This rapture theology does have dire consequences, as we’ll see in a moment, but the outcry here highlights a double problem. First, what really galls these leftist critics is that Pompeo opposes same-sex marriage, abortion, and considers Islam to be a dangerous political movement masquerading as a religion. That’s why his 2015 speech has come to light and is making the rounds on social media and on prominent Leftist websites.

Pompeo is correct in his assessment of how “multiculturalism” is used to normalize same-sex sexuality, same-sex marriage, transgenderism, gender fluidity, abortion, and laws denying Christians the right to exercise their faith publicly.

It’s startling that these Leftists will attack Pompeo for his Christian beliefs but say nothing about what Islamists are doing around the world and hope to do in every country where they live and hope to control through immigration.

Those attacking Pompeo would never dare do the same thing to a Muslim running for political office. But we know all of this.

The Left continues to attack Christians for their faith and yet says nothing about Islamists who do not believe in a jurisdictional separation between church and faith (as Christians do). In fact, Democrats continue to vote for Muslims and put them in office. Democrats will give Islamists the rope with which they will hang us.

At the same time, Democrats criticize Christian judges for their religious beliefs on topics like abortion and homosexuality. Sens. Kamala Harris, D-Calif., and Mazie Hirono, D-Hawaii have questioned a federal judicial nominee over his membership in the Knights of Columbus. “The Knights of Columbus has taken a number of extreme positions,” Hirono said. “For example, it was reportedly one of the top contributors to California’s Proposition 8 campaign to ban same-sex marriage.”

Proposition 8 passed in 2008. Were all who voted to ban same-sex marriage extremists? Were Barack Obama and Hillary Clinton extremists when they opposed same-sex marriage? US District Court Chief Judge Vaughn Walker overturned the vote. “[S]upporters of Proposition 8 filed a motion in district court to vacate Walker’s decision, citing Walker’s own post-trial statement that he has been in a long-term relationship with another man.” It’s OK for homosexual judges to have biases, but not Christians.

All of this brings me to the point of this article. One of the reasons we are in this mess is that millions of Christians are theologically disengaged from the fight. They speak out against abortion, same-sex marriage, and many other Leftist causes, but are stymied by a theology that tells them that there’s nothing they can do to stop it.

Leftists lament Pompeo’s belief in the “rapture,” but they should be thankful for the spurious doctrine. The “rapture” has kept Christians disengaged for decades.

What is the “rapture”? The doctrine was developed in the early part of the 19th century. It teaches that the church will be “raptured,” snatched directly up to heaven, prior to, during, or after a seven-year period called the Great Tribulation during which all hell will break loose. This event is today usually said to be looming sometime within our lifetime, even any moment now.

This event is said to be inevitable, and the building-up to the Great Tribulation is said to be the inevitable steady decline of this world into an immoral pit from which there is no escape. Consider the following expressions of this cultural surrender (all but the last of these points are from leading proponents of this view): 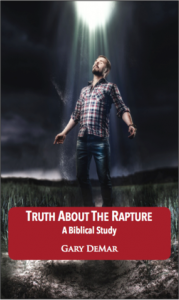 A hundred years or more of this type of teaching have had a greater impact on our world than the words of the drug-addled Timothy Leary who told the 30,000 gathered for the first Human Be-In in San Francisco’s Golden Gate Park to “turn on, tune in and drop out.” Millions of Christians continue to sit back and watch the world disintegrate around them as they wait for an escape that is said to be near but never comes. We are now paying the price for our neglect.

For a comprehensive study of the “rapture,” see my book THE TRUTH ABOUT THE RAPTURE: A BIBLICAL STUDY.