Seventy years ago, on May 14, 1948, the political state of Israel was established. For millions of Christians, the political establishment of Israel in 1948 has held prophetic significance. The claim has been made repeatedly that 1948 began what has been called the “fig tree” generation based on Matthew 24:32-34 where Jesus said:

Now learn the parable from the fig tree: when its branch has already become tender and puts forth its leaves, you know that summer is near; so, you too, when you see all these things, recognize that He is near, right at the door. Truly I say to you, this generation will not pass away until all these things take place.

The fig tree is said to be Israel becoming a nation again, a fulfillment of Bible prophecy. From the 1948 date, a Christian could calculate that the “rapture” would take place within 40 years before that 1948 generation passed away.

In his 1976 book The Soon to be Revealed Antichrist Chuck Smith wrote, “we are living in the last generation which began with the rebirth of Israel in 1948 (see Matt. 24:32–34).” You will search in vain in the three verse’s Smith references to find any mention of “the rebirth of Israel.”

He repeats the claim in his 1978 book End Times: “If I understand Scripture correctly, Jesus taught us that the generation which sees the ‘budding of the fig tree,’ the birth of the nation of Israel, will be the generation that sees the Lord’s return. I believe that the generation of 1948 is the last generation. Since a generation of judgment is forty years and the Tribulation period lasts seven years, I believe the Lord could come back for His Church any time before the Tribulation starts, which would mean any time before 1981. (1948 + 40 – 7 = 1981).” ((Chuck Smith, End Times (Costa Mesa, CA: The Word for Today, 1978), 35.))

If this prophetic math sounds familiar, it’s because the same end-time logic was used by Hal Lindsey in 1970. With the publication of The Late Great Planet Earth in 1970, Lindsey made a near-certain prediction that a pre-tribulational rapture would take place before the passage of 40 years from 1948:

The most important sign in Matthew has to be the restoration of the Jews to the land in the rebirth of Israel. Even the figure of speech “fig tree” has been a historic symbol of national Israel. When the Jewish people, after nearly 2,000 years of exile, under relentless persecution, became a nation again on 14 May 1948 the “fig tree” put forth its first leaves.

Jesus said that this would indicate that He was “at the door,” ready to return. Then He said, “Truly I say to you, _this generation_will not pass away until all these things take place” (Matthew 24:34, NASB).

What generation? Obviously, in context, the generation that would see the signs—chief among them the rebirth of Israel. A generation in the Bible is something like forty years. If this is a correct deduction, then within forty years or so of 1948, all these things could take place. Many scholars who have studied Bible prophecy all their lives believe that this is so. ((Hal Lindsey, The Late Great Planet Earth (Grand Rapids, MI: Zondervan, 1970), 53–54.)) 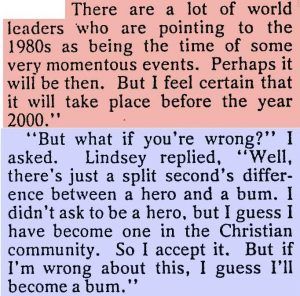 In 1977, Lindsey was interviewed by Prof. W. Ward Gasque of Regent University in Canada regarding the “rapture.” Lindsey said:

There a lot of world leaders who are pointing to the 1980s of being the time of some very momentous events. But I feel certain that it will take place before the year 2000.

Gasque then asked, “But what if you’re wrong?” Lindsey replied:

He was wrong, but he didn’t become a bum. He and many other prophecy writers like him continue to see the political reestablishment of Israel in 1948 as the key end-time prophetic sign that will lead to the “rapture” and untold global slaughter. When the 40-year-generation interpretation failed, they redefined a generation to be 70 years.

In his interview with Gasque, Lindsey speculated that a generation could be “between sixty and eighty years.”

It was these types of predictions that led more responsible prophecy writers to abandon the fig tree generation interpretation. John F. Walvoord was one of them:

Actually, while the fig tree could be an apt illustration of Israel, it is not so used in the Bible. In Jeremiah 24:1-8, good and bad figs illustrate Israel in the captivity, and there is also mention of figs in 29:17. The reference to the fig tree in Judges 9:10-11 is obviously not Israel. Neither the reference in Matthew 21:18-20 nor that in Mark 11:12-14 with its interpretation in 11:20-26, gives any indication that it is referring to Israel, any more than the mountain referred to in the passage. ((Walvoord is clearly wrong about this. First-century Israel is the object of Jesus’ judgment discourse in Matthew 21:18–20 and Mark 11:12–14. See Gary DeMar, “Fruitless Trees and the Nation of Israel,” Last Days Madness: Obsession of the Modern Church, 4th ed. (Atlanta, GA: American Vision, 1999), 397-405.)) Accordingly, while this interpretation is held by many, there is no clear scriptural warrant. ((John F. Walvoord, Matthew: Thy Kingdom Come (Chicago, IL: Moody, [1974] 1980), 191–192.))

Like Walvoord, dispensational author Mark Hitchcock also rejects the often-used argument that the fig tree in Matthew 24:32 describes the reinstitution of the nation of Israel, a point he makes in his book The Complete Book of Bible Prophecy. ((Mark Hitchcock, The Complete Book of Bible Prophecy (Wheaton, IL: Tyndale House Publishers, 1999), 158.)) There are other dispensationalists who reject the widespread belief that the fig tree of Matthew 24 refers to modern-day Israel. Larry D. Pettegrew, Provost and Dean at Shepherds Theological Seminary, wrote: “The fig tree, however, does not illustrate Israel becoming a nation in 1948. The fig tree is simply an illustration from nature.” ((Larry D. Pettegrew, “Interpretive Flaws in the Olivet Discourse,” The Master’s Seminary Journal 13/2 (Fall 2002), 173–190. ))

In the Tim LaHaye Prophecy Study Bible, published in 2000, the editors conclude (contrary to LaHaye’s personal beliefs on the subject) that “the fig tree is not symbolic of the nation of Israel.” ((LaHaye, Prophecy Study Bible, 1040, note on Matthew 24:32–33. If Israel is the fig tree in Matthew 24:32, then Israel is the fig tree in 21:18-20 where Jesus says, “‘No longer shall there ever be any fruit from you.’ And at once the fig tree withered.” The fig tree of Matthew 24 was a leaves-only tree. There is no fruit on the tree. A fruitless tree is to be cut down (Luke 13:6-9). The tree was fruitless for three years. The landowner wanted to cut it down. The vineyard-keeper asked for one more year. If it did not produce fruit the next year, it was to be cut down.))

Jesus used the parable of the fig tree as an analogy. His point was that when leaves begin to appear on the fig tree—or, for that matter, on “all the trees” (Luke 21:29)—it is a sign that summer is near. Similarly, when Jesus’ first-century audience (“this generation”) saw certain signs, they knew that the kingdom of God was near, “right at the door” (Matt. 24:33). ((Either “it is near” or “He is near.” Most likely “it,” a reference to the kingdom of God (Luke 21:31). See my book Wars and Rumors of Wars, 151-154.)) Near to what? Near to fulfilling the promise Jesus made about coming within a generation to destroy the temple and the entire Old Covenant system and inaugurate a New Covenant (Matt. 24:1-3). This is the simple and clear meaning of the text. Any other interpretation wildly stretches the Bible beyond its intended meaning.

The Olivet Discourse in Matthew 24 and Mark 13 and parallels in Luke 17 and 21 are not about restoring Israel as a nation again. They refer to the judgment of Israel that took place in AD 70. You see, Hal Lindsey, Tim LaHaye, Chuck Smith, and many other contemporary prophecy writers were right about one thing. A biblical generation is about 40 years in length. They went wrong in their timing. That 40-year generation is long past.

For more on the biblical understanding of Matthew 24, Revelation, Bible prophecy, and the “Last Days,” see the huge collection of relevant resources available in our store.