For more than 40 years I have been following the views of prophecy speculation and the claims made by people about end-of-the-world scenarios. People have short memories, or have no memory, about prophecy speculators who have assured an anxious public that Jesus would return by this or that date. His coming is always said to be “near.” Despite scores of failures, there is yet a new confident prediction of “an ancient biblical warning” called “the Great Sign” that is “foretold to precede a series of disastrous global events.”

But here is why Christians should not be anxious at all about this alleged prophecy.

A Track Record of Lies

The 1980s was described as the “terminal generation.” In 1970, Hal Lindsey wrote The Late Great Planet Earth which included a prophetic teaser that something called the “rapture” would take place before 1988. It was based on the claim that when Israel became a nation again in 1948 that the “rapture” would occur within a 40-year prophetic window. Lindsey’s book sold around 30 million copies.

Christians still fell for it.

Following a similar prophetic script, Pastor Chuck Smith of Calvary Chapel in California wrote in his 1976 book The Soon to be Revealed Antichrist that “we are living in the last generation which began with the rebirth of Israel in 1948 (see Matt. 24:32–34).” He repeated the claim in his 1978 book End Times:

If I understand Scripture correctly, Jesus taught us that the generation which sees the ‘budding of the fig tree,’ the birth of the nation of Israel, will be the generation that sees the Lord’s return. I believe that the generation of 1948 is the last generation. Since a generation of judgment is forty years and the Tribulation period lasts seven years, I believe the Lord could come back for His Church any time before the Tribulation starts, which would mean any time before 1981. (1948 + 40 – 7 = 1981). ((Chuck Smith, End Times (Costa Mesa, CA: The Word for Today, 1978), 35.))

If this prophetic math sounds familiar, it’s because the same end-time logic had been used by Hal Lindsey in The Late Great Planet Earth in 1970.

On December 31, 1979, Smith told those who had gathered on the last day of the year that the “rapture” would take place before the end of 1981. He went on to say that because of ozone depletion Revelation 16:8 would be fulfilled during the tribulation period: “And the fourth angel poured out his bowl upon the sun; and it was given to it to scorch men with fire.”

In addition, Halley’s Comet would pass near Earth in 1986 and would wreak havoc on those left behind as debris from its million-mile-long tail pummeled the planet. Here’s how Smith explained the prophetic scenario in his book Future Survival which is nearly identical to what appears on the taped message:

The Lord said that towards the end of the Tribulation period the sun would scorch men who dwell upon the face of the earth (Rev. 16). The year 1986 would fit just about right! We’re getting close to the Tribulation and the return of Christ in glory. All the pieces of the puzzle are coming together. ((Smith, Future Survival, 21.))

Nothing significant happened in 1986 related to Halley’s Comet, and there is no reason why it should have since it’s been a predictable phenomenon for more than two millennia as it makes its way around the sun every 75 to 76 years.

Do you remember all the hype and hysteria generated over the planetary phenomenon called the Jupiter Effect? No? Let me refresh your memory. In 1982, there was to be an unusual alignment of the planets. The planets would be in a straight-line formation perpendicular to the sun. This alignment — an event that occurs every 179 years according to Gribbin and Plagemann in The Jupiter Effect — supposedly exerts an uncommon gravitational pull on the planets. Hal Lindsey saw eschatological significance in the Jupiter Effect.

He wrote in 1980, “This alignment causes great storms on the sun’s surface, which in turn affect each of the planets. The sun storms will not only affect our atmosphere, as was previously mentioned, but they will slow down the Earth’s axis slightly.” This slowdown, according to Lindsey and his “author-experts,” would mean putting “a tremendous strain on the Earth’s faults, touching off earthquakes.” This new wave of earthquakes was to bring about great floods because dams have been built over fault lines. In addition, we were to see “nuclear power plant meltdowns at facilities built on or near the Earth’s faults.” ((Hal Lindsey, The 1980s: Countdown to Armageddon (King of Prussia, PA: Westgate Press, 1980), 31.)) But what happened?

I could offer example after example of these types of prophetic speculation. I have shelves full of books on the subject.

Here’s the latest. September 23, 2017, is said to be prophetically significant for “the End of Days.” Similar to the Jupiter _Non-_Effect and the faded Blood Moon phenomena, this prophecy is said to be written in the stars. The “prophecy” is from Prophecy News Watch: ((Note: “Prophecy News Watch appears to be owned or operated by an employee or former employee of radical dispensationalist, Alien encounter author and UFOlogist, and confessed repeat-plagiarist, Chuck Missler and Koinonia House ministry."))

What does Revelation 12:1-2 say?: “And a great sign appeared in heaven: a woman clothed with the sun, with the moon under her feet, and on her head a crown of twelve stars.”

The prophecy seems to be more about astrological signs than biblical signs.

Anyone looking at the illustration of what’s supposedly going to happen can see at least one problem. Can you spot it? 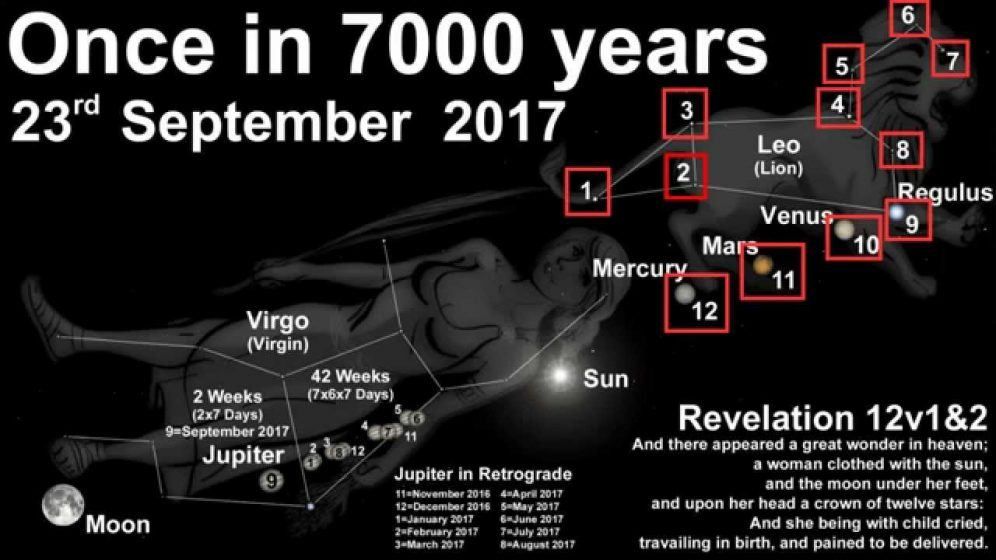 Three of the “stars” are planets. Planets are not stars. In addition, constellations are manufactured. The stars are linked together in order to follow an already developed pattern. With enough imagination, you could build any image out of the thousands of stars that appear on a clear evening.

The bigger problem, however, is the biblical symbolism. Where does the image of the sun, moon, and 12 stars come from? Not from astrology. It comes from the Bible:

“Now [Joseph] had still another dream, and related it to his brothers, and said, ‘Lo, I have had still another dream; and behold, the sun and the moon and eleven stars were bowing down to me'” (Gen. 37:9). Joseph makes the 12th star with his father (Jacob) being the sun and his mother (Rachel) the moon (37:10). The image, therefore, is symbolic (Rachel was dead: 35:19), representing Israel.

What does Israel, represented by a woman who stands on the moon, is draped with the sun, and has a crown of 12 stars, do? She gives birth to a child: “and she was with child; and she ‘cried out, being in labor and in pain to give birth’” (Rev. 12:2).

And what is there to devour the child upon his birth?

Then another sign appeared in heaven: and behold, a great red dragon having seven heads and ten horns, and on his heads were seven diadems. And his tail swept away a third of the stars of heaven and threw them to the earth. And the dragon stood before the woman who was about to give birth, so that when she gave birth he might devour her child (12:3-4).

Revelation 12 is describing the first coming of Jesus. The woman is Israel. The child is Jesus. The dragon is Rome/Herod. The Herods are descendants of Esau and are the Bible’s Edomites and Amalekites: “Now the first came forth red, all over like a hairy garment; and they named him Esau” (Gen. 25:25).

Jesus is born, the great deliverer, but an Edomite/Amalekite, Herod, tries to take him out at the beginning; Jesus is rescued to safety in Egypt. ((Peter Leithart, “Brother v. Brother,” First Things (January 28, 2015). James Jordan writes: “the Herods are the false-prophet/land-beast” of Revelation 13.))

“The seven trumpets layout themes or characteristics of the period between Pentecost and the final judgment of the Old Creation. The postlude to the trumpets, chapters 12-15, lays out the history of that period symbolically, displaying the spiritual realities and conflicts that operate behind the scenes in Acts and the Epistles, and in what follows the end of Acts.

“We begin with the incarnation and ascension of Jesus, the seed of the woman. Satan tried to prevent Jesus from coming into the world: seducing Cain to murder Abel, trying to corrupt Israel in Egypt, seeking to destroy the Davidic line through Athaliah, and moving Herod to try and kill the baby Jesus. He failed, and Jesus went to heaven, where, as Michael the Arch-archangel, he cast out Satan. (The last four names of Satan are given here: Dragon, Serpent, Devil, Satan.) Satan was cast down to the land, where he took up residence in the Temple as Wormwood – but only for a short time.

“Right away he sought to persecute the woman, the bride of Christ. These are the events of Acts 3-7, ending with the stoning of Stephen. The woman fled into the wilderness, which we see in Acts 8 as the saints flee Jerusalem. After a number of years of peace for the Church (Acts 9:31), Wormwood poured out his poisonous waters, false Judaizing doctrines, to try and corrupt the woman. God raised up Paul to defeat Satan and the Judaizers, and meanwhile the land (the Circumcision) drank up his false doctrine.

“Satan has engaged in two tactics: persecution and corruption. These have failed. So now he decides to return to persecution, but this time against the non-Jewish believers, the ‘rest of her offspring.’ He stands on the sands of the sea, addressing the Roman Gentile sea, and raises up the Sea Beast.” ((James B. Jordan, The Vidication of Jesus Christ: A Brief Reader’s Guide to Revelation (Monroe, LA: Athanasius Press, 2008), 55-56.))

By following biblical theology rather than astrology, ((For an interpretation that has astrological elements related to the first coming of Jesus Christ, see David Chilton, The Days of Vengeance (299-306).)) the Bible interpreter finds an actual biblical interpretive methodology without having to engage in prophetic speculation.

There is, therefore, no reason at all to be anxious about this alleged “prophecy” or this astronomical “Great Sign.” What Revelation speaks of in chapter 12 was fulfilled in the first century. We need not fear anything like it today. You may safely ignore the latest fearmongering in the long track record of failed End of Days predictions.

For the simple, biblical explanation of the Last Days according to Jesus, see my short booklet, Is Jesus Coming Soon? For a more comprehensive study, consider my book Last Days Madness.